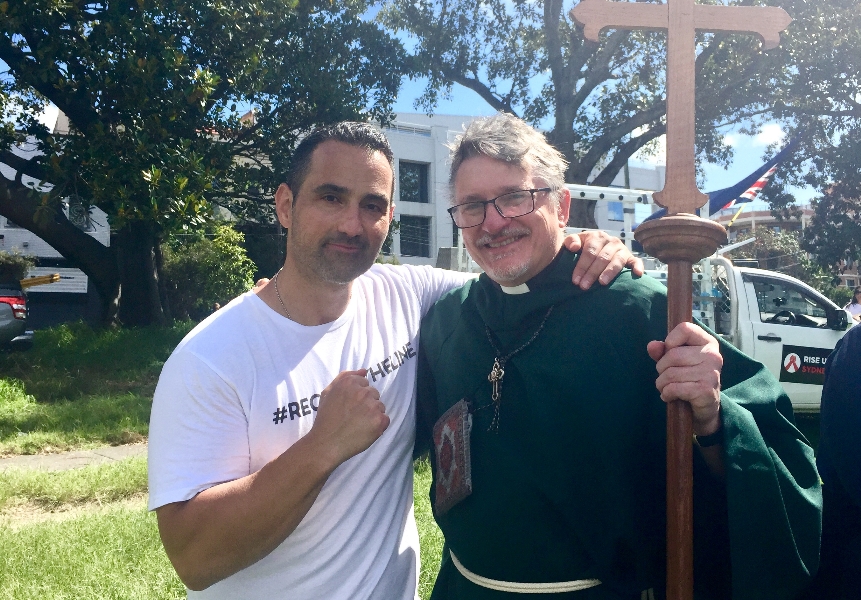 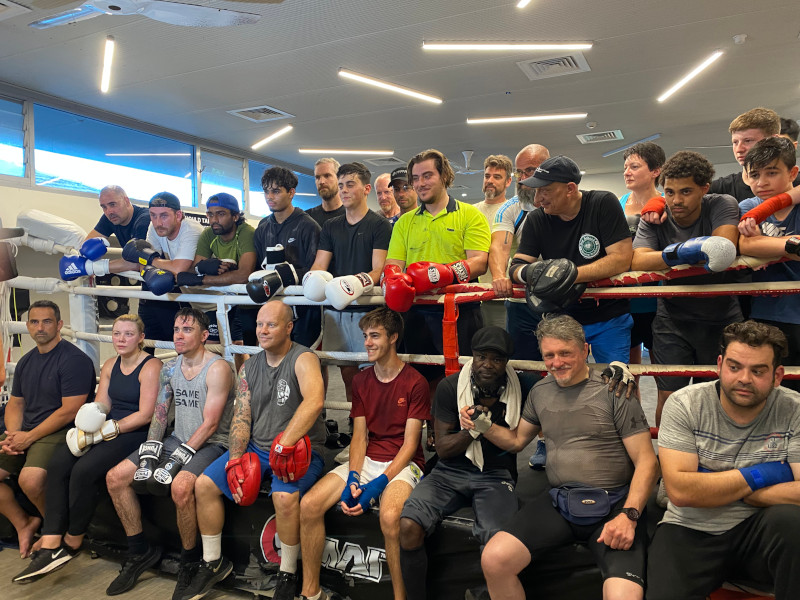 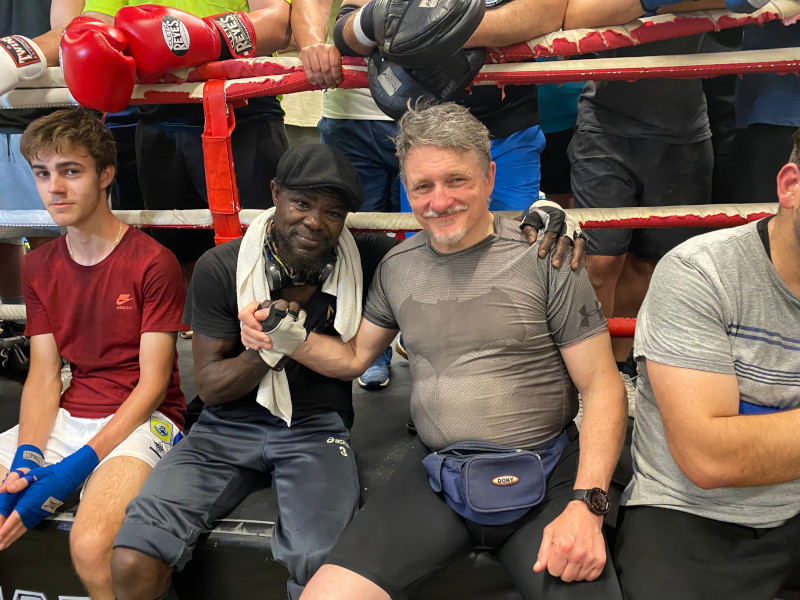 Sol Egberime and I have always fought side by side

We begin today with these words from the Apostle Paul, reminding us that we’ve just celebrated ‘Gaudate Sunday’, which, in English, translates as Sunday of Joy, which means that we are now in the Week of Joy. 🙂

In truth, I have no idea who decided that the four Sundays leading up to Christmas should represent hope, love, joy, and peace, and I don’t know who put them in that order. Even so, I find these words from Paul inspiring. He was full of joy, even though his situation was anything but joyful. He was in prison!

I don’t think it’s just that Paul was one of those ‘glass half full’ kinda guys. Paul rejoiced ‘in the Lord’. He lifted his eyes above his personal situation and focused on Christ and on the family of faith that Christ had given him. Paul was in pain, but he saw himself as just one member of a greater community that was going from strength to strength. Paul identified with his team so strongly that it transformed his perspective on his own struggles. He saw his pain as both transitory and trivial in the light of the great things that lay ahead!

I wish I found it easier to see things the way Paul did. I get so transfixed on the issues I’m dealing with. I get bogged down and forget to look up. Once I do, I get a fresh perspective:

Instead of feeling bitter about being fined for trying to lead prayers in Bankstown, I look up and give thanks to the beloved sister who paid my $1,000 fine without me knowing! Yes, she had done it anonymously, but then realised that I didn’t know it had been paid and didn’t want me to pay it again so … thank you, Bronwyn.

Instead of wallowing in the fact that the church is throwing out our boxing club, I look up and see the wonderful community of kids and their families who are a part of our club, and who are now joining hands in an attempt to forestall our eviction.

Instead of getting depressed about the British court’s terrible decision to extradite our brother, Julian Assange, for trial in the USA, I look up in faith and see that God is still at work through so many good people. Justice and freedom must surely come!

Yes, there are so many things that threaten to overwhelm us and yet, when we look up, everything takes on a new perspective. God has not abandoned us. All things continue to work together for good. Our struggles will pass, and only hope, love, joy, and peace will be left standing.

The Fight for the Fight Club continues

We’ve had a few developments in our battle for the Fight Club this week.

Firstly, we started a community petition on Change.org. I only launched it a few days ago but we are already up to 1,819 signatures as I write. Moreover, reading through the comments people have left on the petition brings me to tears. It’s a wonderful reminder that our work over the last 31 years has not gone unnoticed.

The second piece of good news is that A Current Affair did a second session with us this week, filming the club in action and talking to our kids. Our story is scheduled to screen on Saturday, December 18, at 7 pm, on Channel 9. If you can’t watch it live on TV, you can also watch it on the 9 Now website, after which it will be archived on the Current Affair website.

It was good to work with Nat Wallace from A Current Affair again. He is the same man who covered my personal story of eviction from the church at the beginning of this year. It has been my recurring experience over the last two years that the people God sends to you are often the last people you expect.

The only bad news for the Fight Club this week came via a letter I received from the church. When I saw it in my inbox, I was full of hope that this might be the extension to our lease that we have been hoping for. On the contrary, it was a formal letter, telling me that after December 31st we will be barred from church property and that any club items that I have failed to take will be removed at our expense.

I’m still not clear as to why they felt the need to send this to me. Even so, … look up!

It was great to have two old friends with me last Sunday – Dave Baldwin and Doug Pyeatt.

Doug brought us the reading from Zephaniah (3:14-20), who is one of those index prophets (ie. one you have to look up in the index). The reading was, appropriately, one of joyful anticipation of good times that lie ahead.

The Gospel reading (Luke 3:7-18), by contrast, contained almost no joy! It begins with John the Baptist addressing his audience as a ‘brood of vipers!’ (Luke 3:7) and the mood doesn’t elevate much as the passage progresses.

I’m offering you here a copy of my John the Baptist Christmas Greeting Card that I used to print off each year at this time. It includes the Baptist’s peculiar words of Christmas cheer – “You brood of vipers …” – and highlights the incongruity of this prophetic wild-man with the mood of the silly season. Feel free to download it, print it off, and send it to someone who you think needs it. 😉

I’m keen to hear any feedback you have on this line of thought. It’s not a purely academic issue. If I’m correct, baptism may be less about having your sins washed away than about reclaiming the community for God – a different focus altogether!

We’ll be broadcasting live again this Sunday. Tune in at midday to join us via either:

If you are joining us through the Father Dave Facebook Page, please make sure that you subscribe to my videos and don’t simply follow the page. In order to subscribe (and receive notifications) you need to click the bell icon during the live stream.

It was my great privilege to appear as the final speak at last Sunday’s ‘Reclaim the Line’ rally in central Sydney, and to give a closing prayer (video below).

As I’ve said before, the very fact that these gatherings are closed in prayer is a powerful indication of the new spirituality that is emerging in Australia at the moment. Who would have thought that this most secular of countries would give birth to such a movement, and one that is not being nurtured at all by the official church!

I am finding that God has a role for me to play in all this. These people are hungry for the Word and the Sacraments. I am excited to see where God is taking me.

Finally, if you’re not a financial supporter yet and you can afford to be, you’ll find the usual three options on the Patreon page:

If you’re in one of these heavier divisions, joining me at Binacrombi over the coming weekends won’t cost you anything. If you’re not, we’ll accept a donation anyway. Let me mention specifically the New Year’s weekend at Binacrombi. Joy and I both intend to be there, and we are hoping that as many of our friends as possible will join us. Just let me know if you can make it.

That’s it for today. Forgive the bombardment of information. I appreciate that I’ve left you with quite a few tasks:

And expect to see a bit more of me in the media over the coming week. As a courtesy to A Current Affair, we haven’t sent out our press release about the club yet. I expect that when we do it will generate a fair degree of further media interest.

I’ll see you on Sunday for our Eucharist. Until then, may God bless you and strengthen you for the work to which you have been called.

P.S. I’m also including below the recent interview I did with Julian Assange’s brother, Gabriel. Thanks to Justin and the team from Sky Vision Productions for this one.