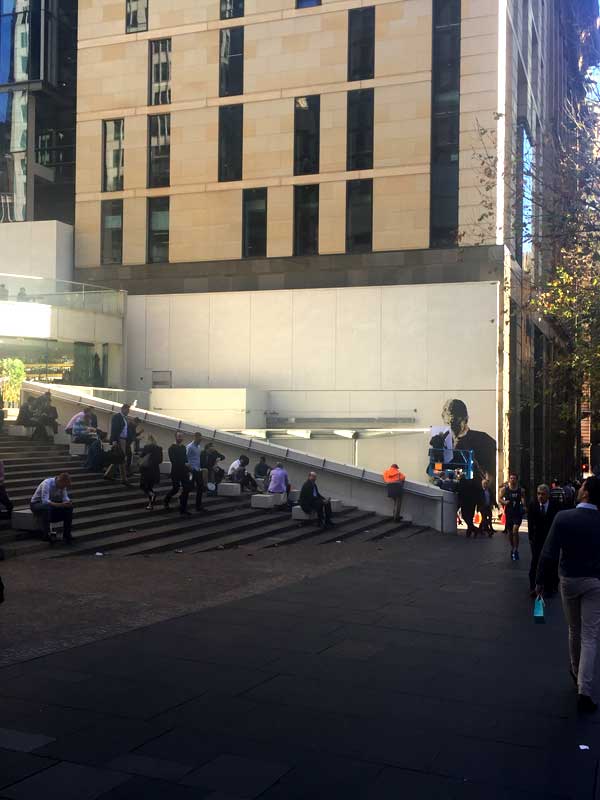 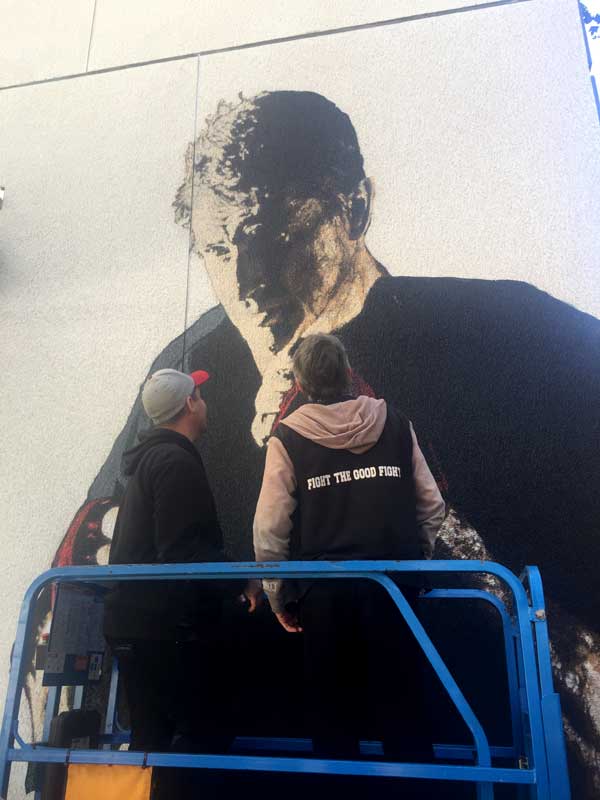 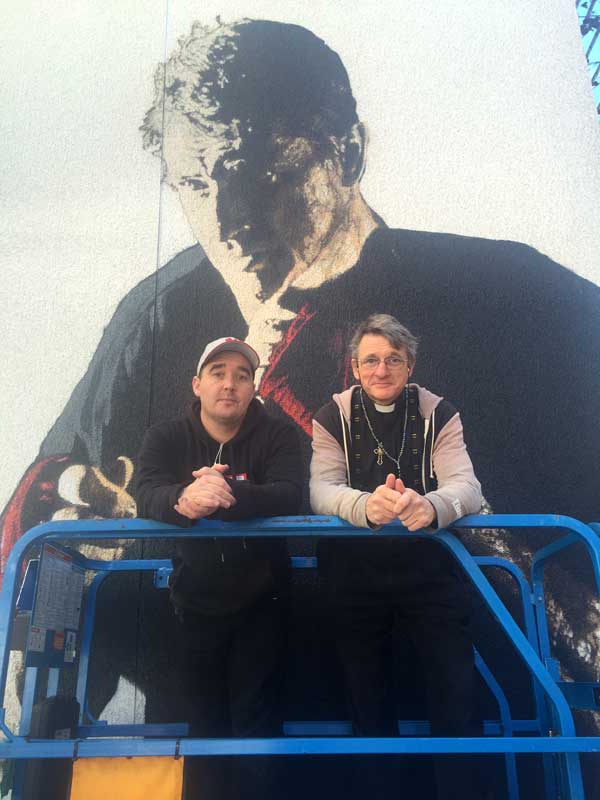 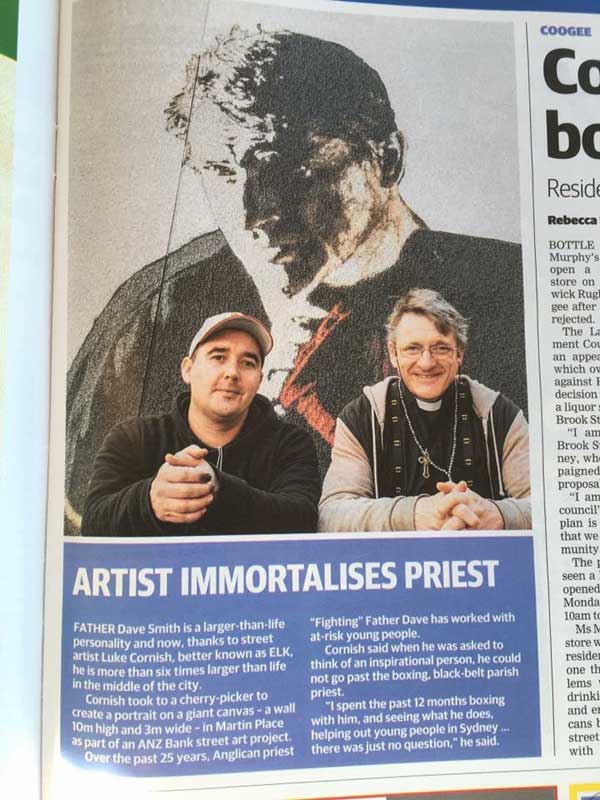 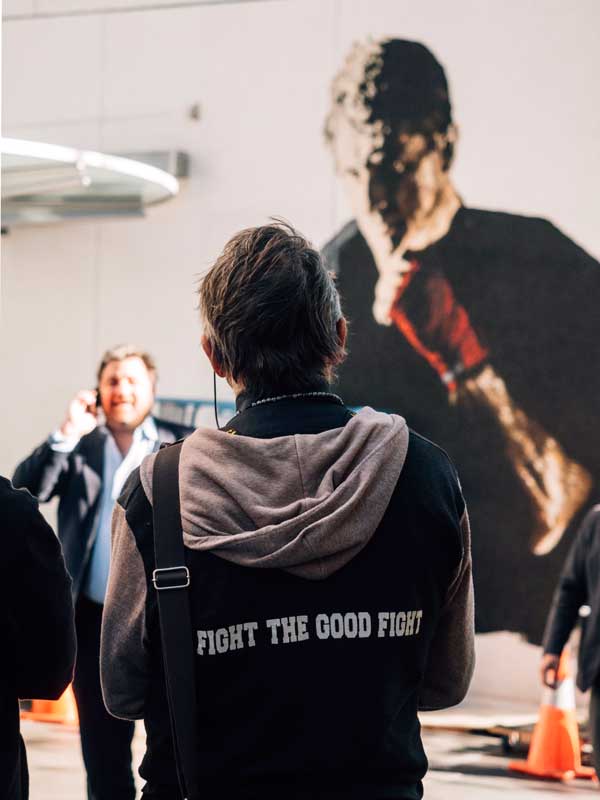 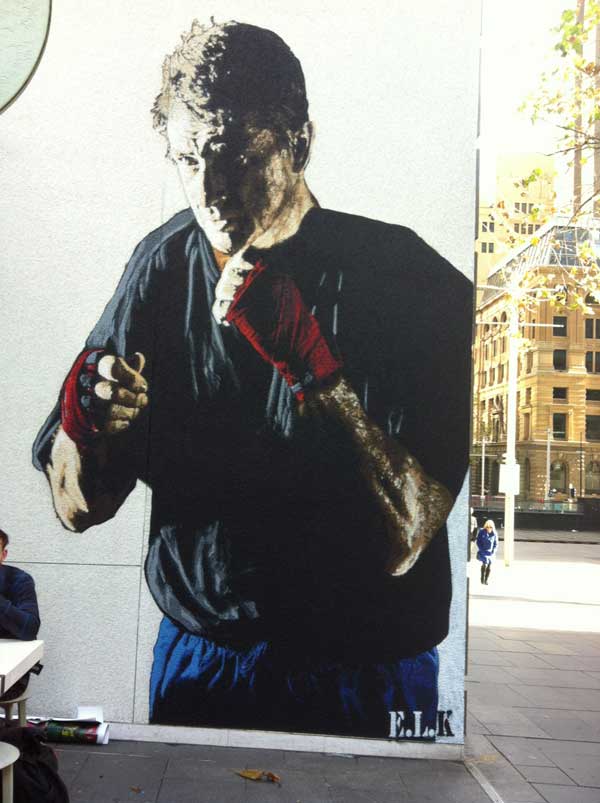 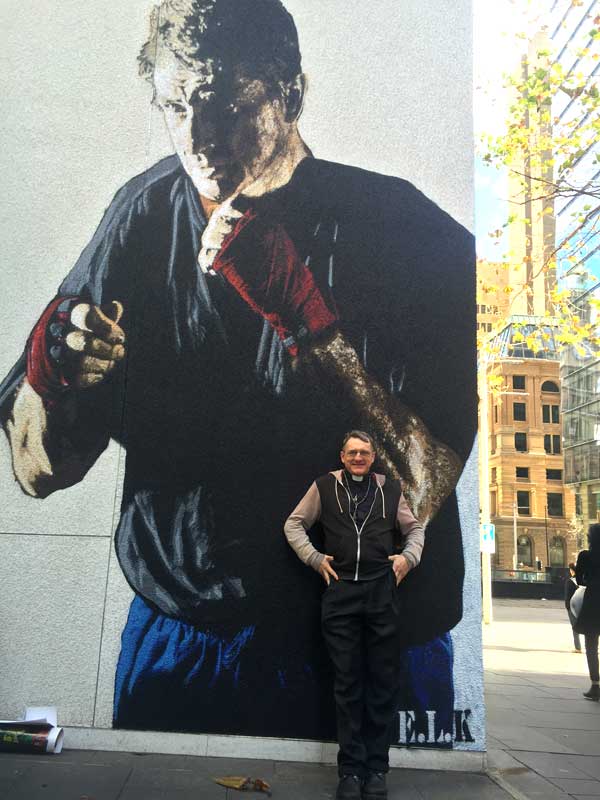 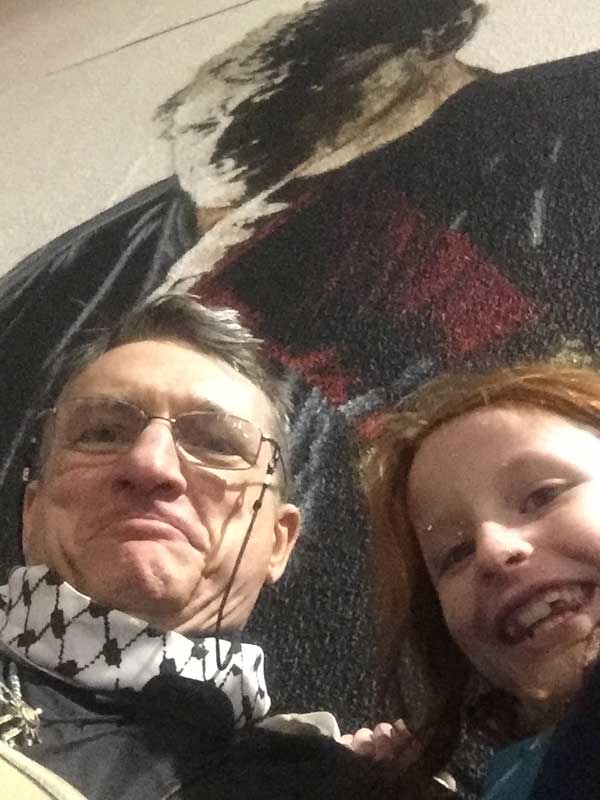 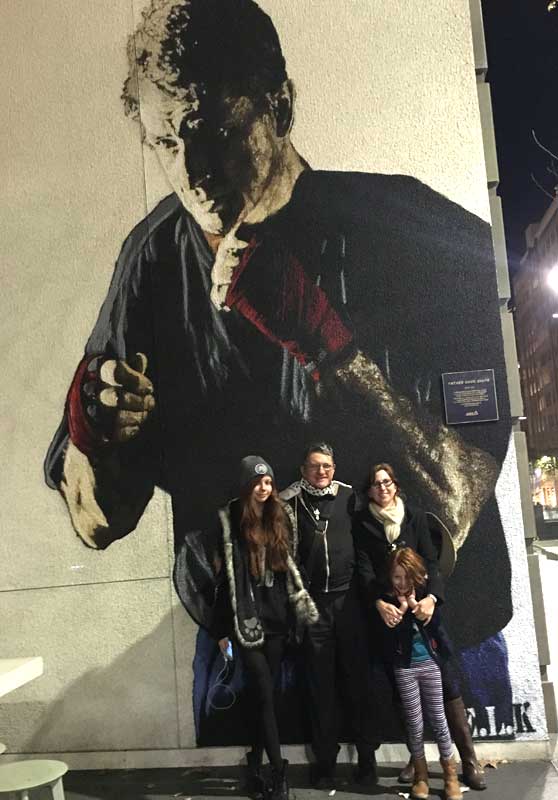 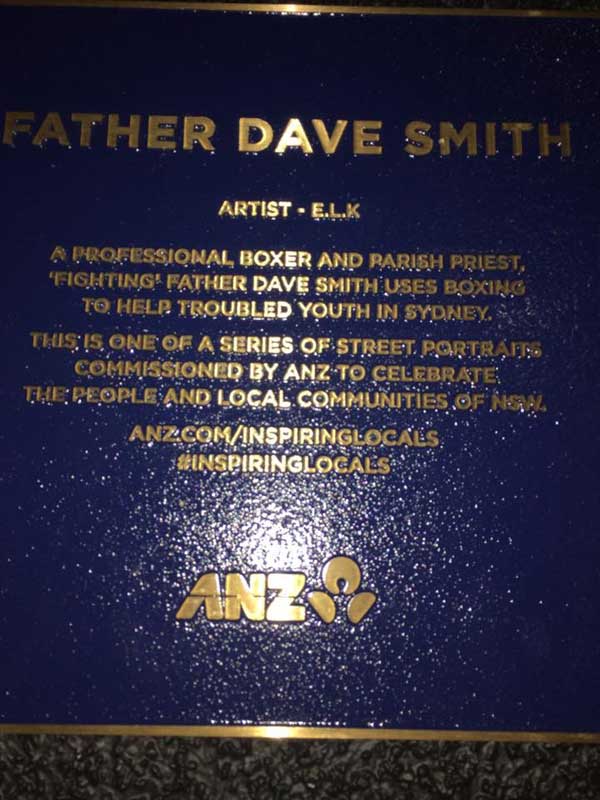 You’ll have to forgive me for devoting a blog post to the larger-than-life Father Dave portrait that’s been splashed across a wall in the centre of the Sydney CBD. Even so, it’s not everyday that this sort of thing happens and I thought it deserved some sort of explanation, along with a word of thanks to those to whom it is due.

The man who made this happen is the artist – my friend, Luke Cornish. He not only single-handedly created the artwork but was the one who proposed having me as his subject in the first place!

In all honesty, I didn’t ever expect it to happen. I signed papers years ago giving permission for the artwork but the project was then delayed multiple times. If you remember the smaller (life-sized) images of me that popped up in various places around the country earlier this year (with me holding up placards saying things like “Let them Stay” and “Hands Off Syria”) they emerged out of the frustration with the delays and signified our acceptance of the fact that the originally-envisaged artwork was never going to happen, and yet … here it is!

Thank you, Luke, for your persistence. What a privilege it is to have been painted by the same man who in Syria, only two months ago, painted a tribute to the martyred Khaled Al-Assad in the ruins of Palmyra! This is a man whose vision and passion for justice is as great as his talent as an artist (and that’s really saying something)!

Some credit must also go to Tom Toby of Wildfire Images – the man who took the photo that Luke’s artwork was based on. Tom was also with us in Syria this year. His photos continue to be a source of inspiration for all of us, and it was his work that featured in our Peace for Palmyra exhibition of last month! That particular photo was taken when we were training with the Syrian Olympic team in Damascus.

A project like this has to have funds behind it of course. In this case the funds were provided by the ANZ bank. I appreciate that the big banks don’t have a great reputation in our community. Even so, I trust that this signifies a serious attempt on the part of ANZ to support community initiatives. Indeed I am hopeful that this will lead to some tangible support from the bank for our work. I’ll let you know.

You can get a fuller picture of what the ANZ Inspiring Locals project here and through the videos that they’ve put together to document the production of these artworks. Just click on any of the icons below to watch these short promo videos. 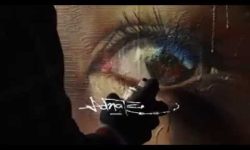 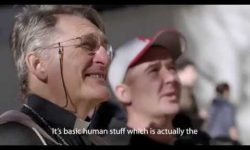 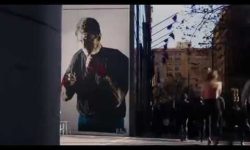 If you haven’t seen the artwork yourself yet, it’s not hard to find. It’s right at the centre of the Sydney CBD in Martin Place. Eerily, this means that it’s only a short distance from the site of the terrible Sydney Siege that took place in December 2014, where two souls were lost to a crazed gunman. I can only hope that the image of me, taken in Damascus with my fists held high, might symbolise the stand we take together against all forms of terrorism and injustice.

This month’s sermon centres on a joke Jesus told to a crowd of religious people. It starts off sounding like a rather politically incorrect joke, making fun of a racial minority, but when we reach the punchline we find that the joke is on the audience! Can you guess which of Jesus’ parables I’m referring to? If not, you’ll have to click the box below to watch the sermon (or you can read the written version here).

OK Fighter, I know you’ve heard plenty from me today but there’s two more things I need to share with you before I let you go.

Firstly, most of those amazing photographs used in the Peace in Palmyra exhibition are now for sale. I wish I could hang them all around my house but there isn’t the space and (in truth) I need to sell most of them to cover the costs of the exhibition.

You can see all twelve of those amazing images featured at the top of the Peace in Palmyra blog post. If you’d like to own one of these and have it hanging on the wall of your home or gym, just let me know. The costs are as follows:

You’ll need to call me or email me if you’re interested and we can work out how to get the artworks to you. If you live locally that won’t be too hard but if you live in Saskatchewan we’ll have to work out a safe and cost-effective form of transportation.  All my contact details are here.

Finally, I wanted to share with you that I’ll be in Iran for the first week of August. I’ve been invited there to participate in a documentary being made on international human-rights work. I know the film-makers and they are good people. I’m keen to help them in the project, and they have offered to cover the costs of my flights and accommodation.

While in Iran I plan to catch up with my dear friend, Sheikh Mansour Leghaei. I also hope to interview some prominent Islamic clergy as a part of the new book I’m working on. The book will probably be entitled simply “Christians and Muslims can be friends” unless I can come up with something more exotic.

Please say a prayer for me, most especially with regards to this book. Given the anti-Islam climate in Australia at the moment (and in so many Western countries) my book could be quite timely. Unfortunately I haven’t been able to work on it at all for months, but I hope to put some focused time into it over the next few weeks.

In truth, my lack of progress on the book is symptomatic of the fact that I am just too stretched at the moment. The bottom line is that I need more help here. As mentioned, I hope to get more funding soon and will use this to grow the Fighting Fathers staff team again if possible. Pray please that our loving Heavenly Father sends someone to me soon, or perhaps ask the Lord whether it’s time for you to join our team. We sorely need another good man or woman here. Let me know if you’re feeling the call!