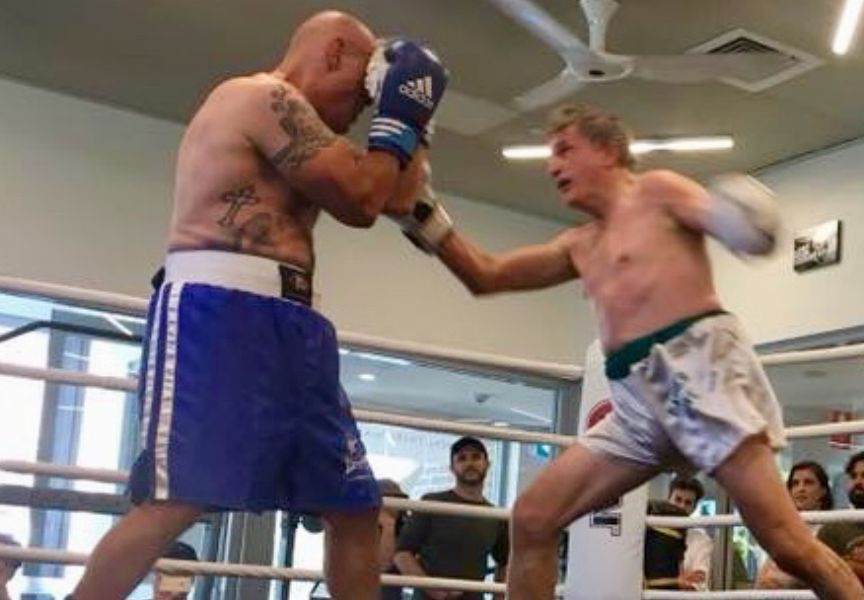 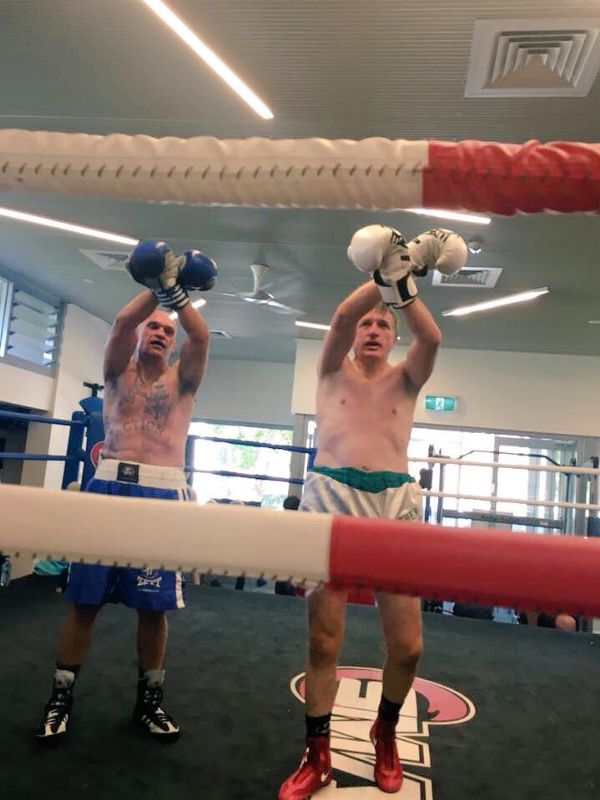 fighting for the men of Manus 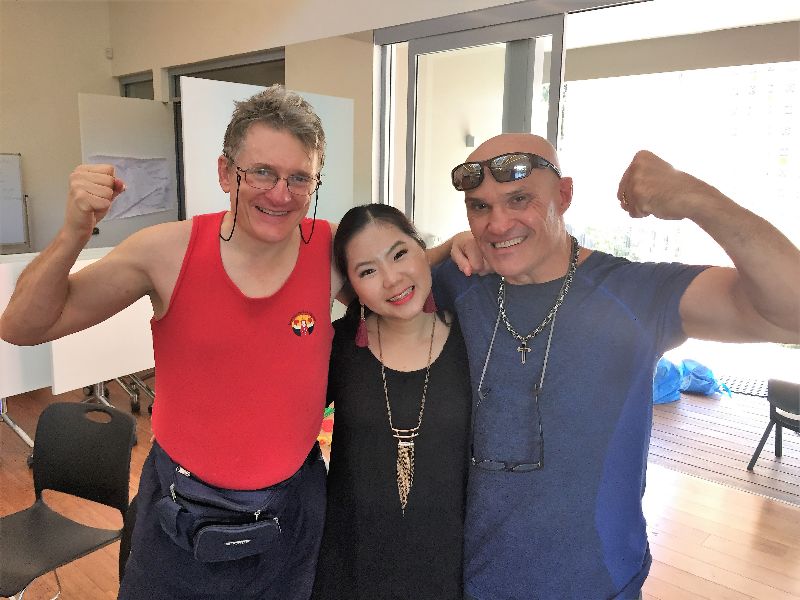 it was a great team effort 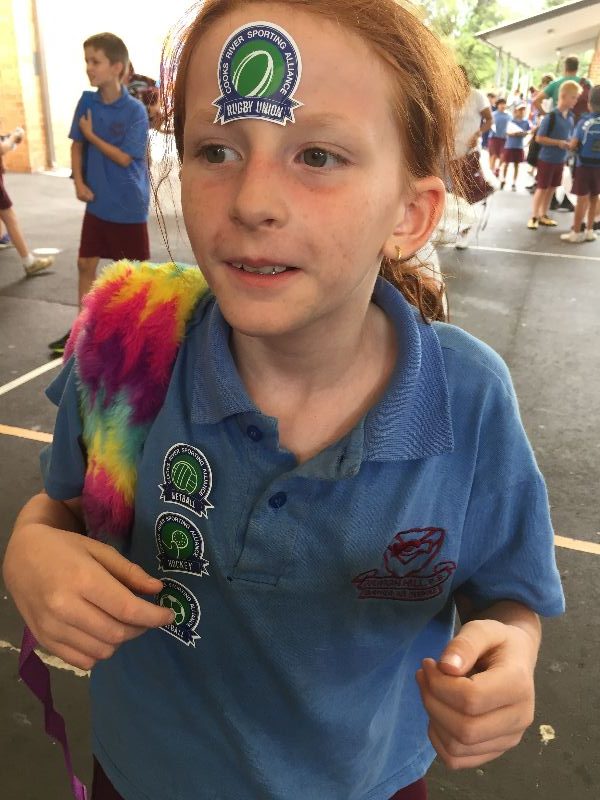 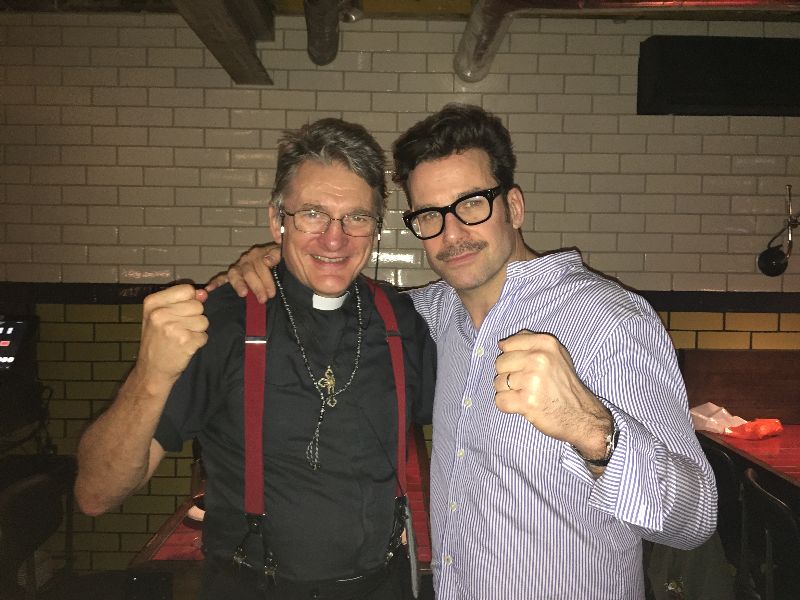 with David Frossard of ‘The Fragrance Foundation’. 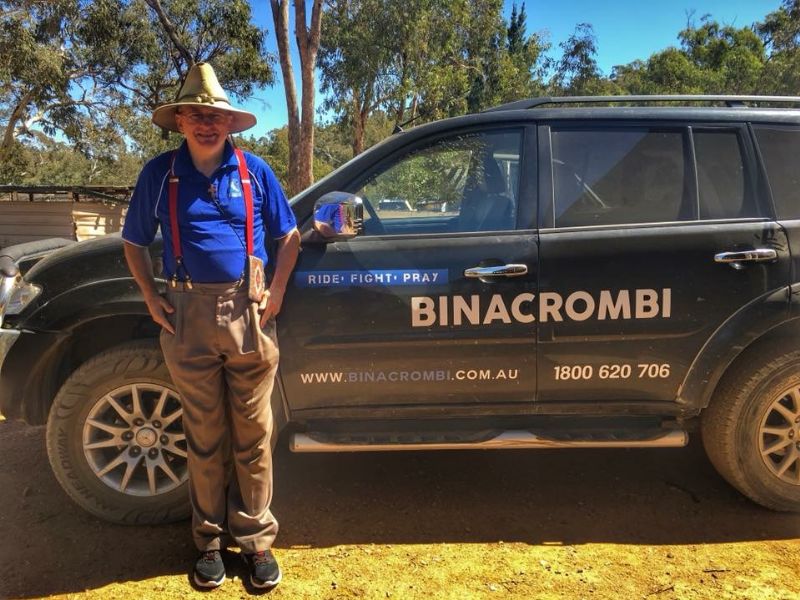 back to the bush 🙂 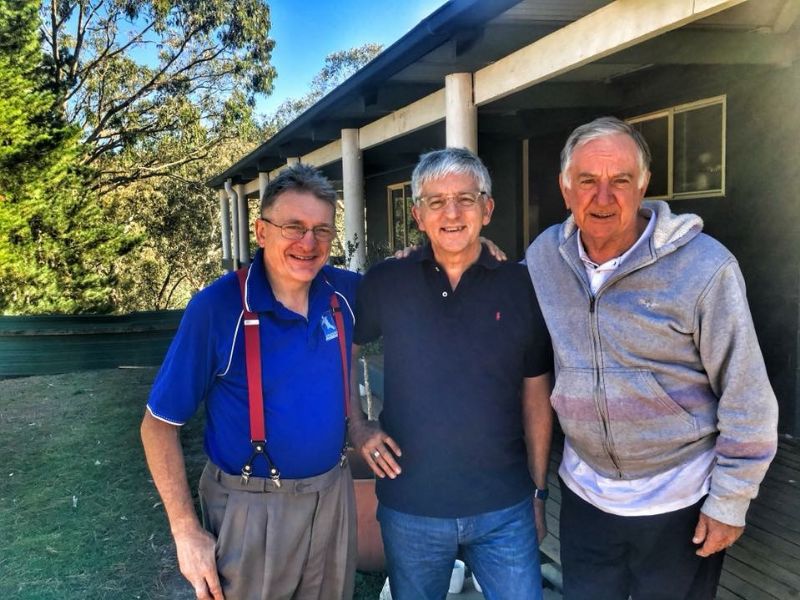 introducing Stephen Sizer to the bush and to Fighting Father Terry 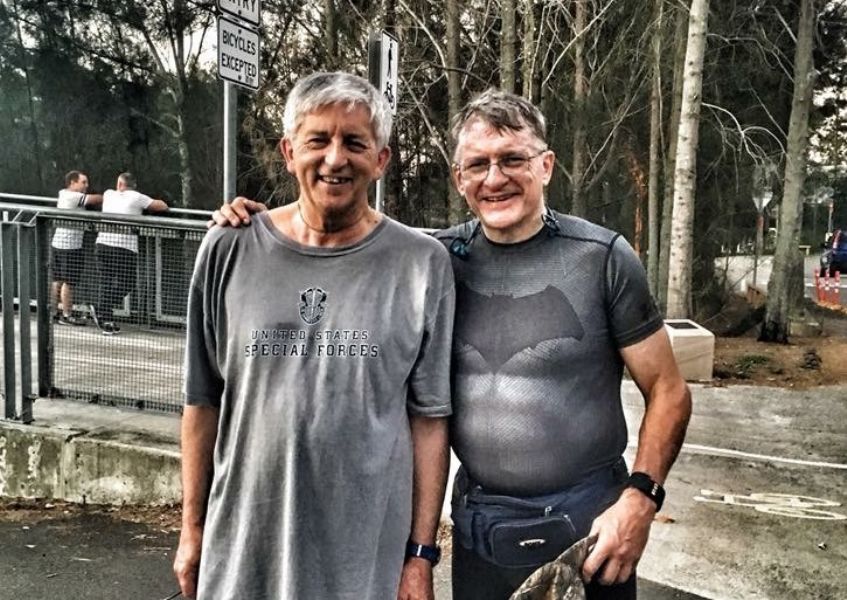 taking Stephen running around the bay 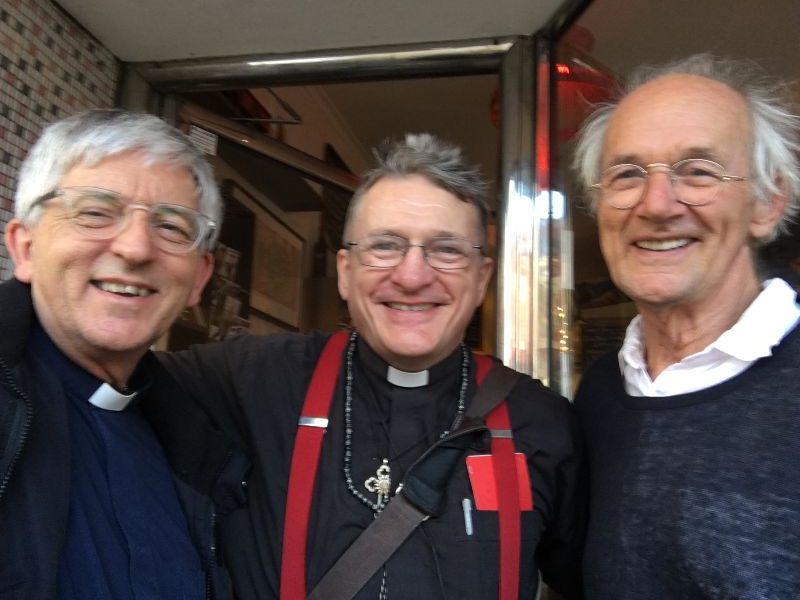 Three amigos back together again 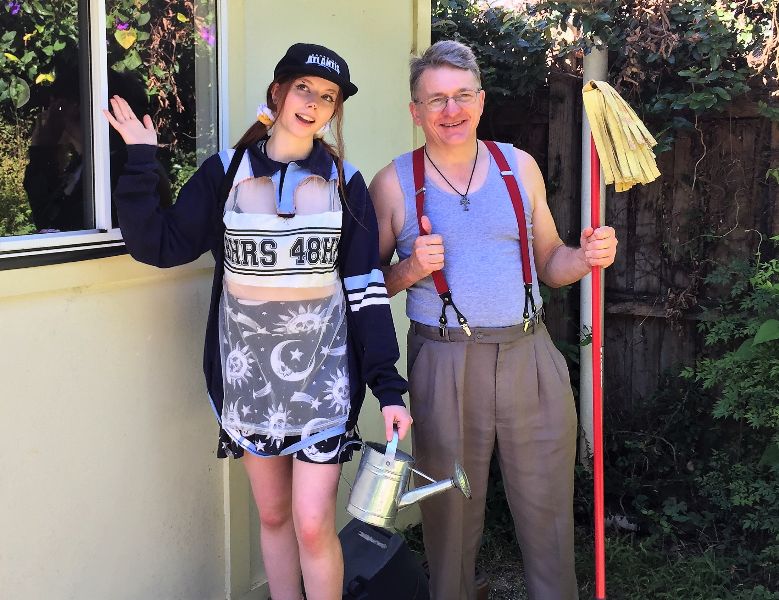 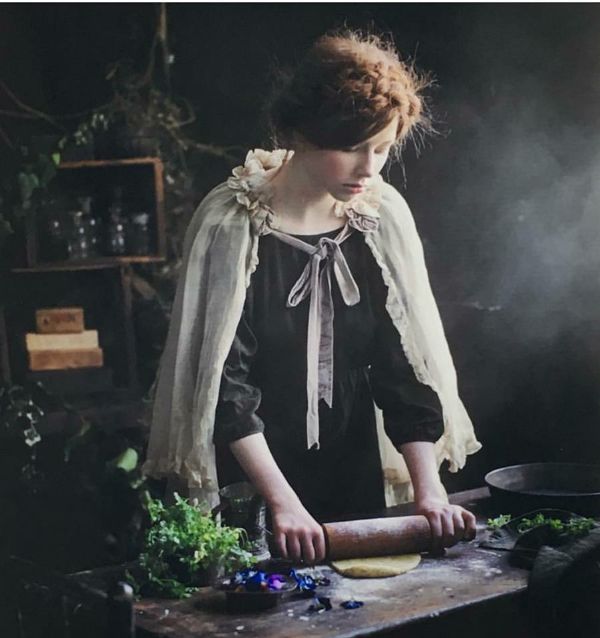 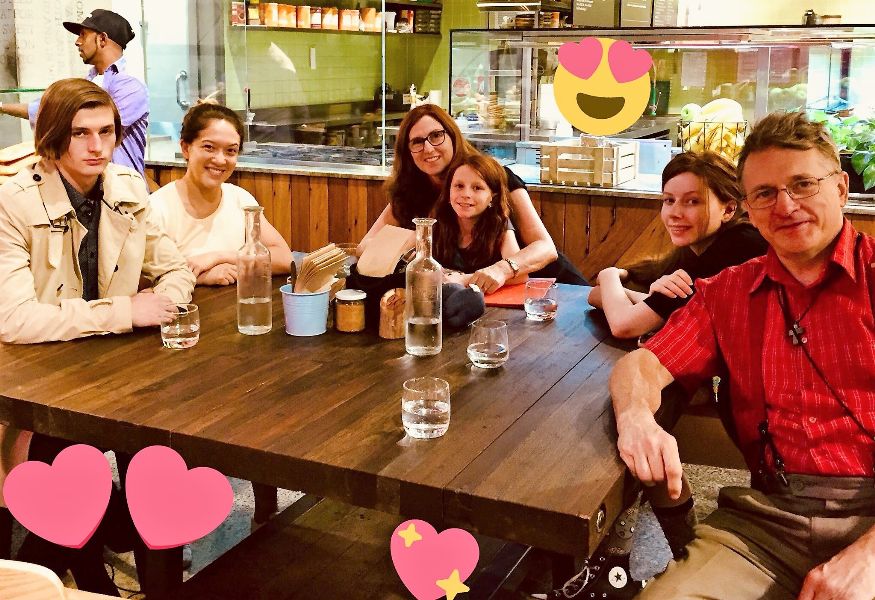 All of the above have been worthwhile and exciting but they’ve left me a little exhausted. Indeed, towards the end of this post I’ll be making an appeal for more help. If you want to avoid hearing me beg, stop reading a few paragraphs short of the end. 😉

In terms of the fight/fundraiser, it was quite a surreal event. It was a great team effort and we did raise a significant amount for the detainees on Manus Island and Nauru. Even so, they were the weirdest rounds of boxing I’ve ever experienced.

After it was all over, it took me some time to work out why the boxing felt so odd. Then I realised – I’m used to performing in front of hard-core boxing fans, many of whom are drunk. This time we had a crowd of church people and humanitarians, all of whom were very quiet and respectful. Gone were the screams of “rip his head off”, and similar words of encouragement. Instead, a deathly silence descended upon the ring when Dimitri and I started our stoush! I wasn’t sure how to respond! We’re going to have to give this some serious thought before we do it again (though do it again, we will). 🙂

I’m posting the video that Denning made of the fight below. I’d appreciate it if you’d share it around, either by directing your friends to this page or by directly sharing the YouTube link. The aim is two-fold: firstly, I’m hoping that the video will help generate more funds for Gifts for Manus and Nauru. The men on Manus Island, and the men, women and children of Nauru most surely need more support. Secondly though, I’m hoping that the video might catch the eye of a few boxing promoters.

I expect that this will be my last year as a professional fighter, so I want to give it my best shot. As you’ll see in the video, I’m in great shape at the moment. Even so, I’m already Australia’s oldest pro fighter of all time and I don’t expect that I’ll be able to keep going forever. I’d really like to do some significant fundraising with my fists while I still can. I’ll accept any reasonable offer.

So, if you want to challenge me or if you want to organise a challenge for me, I’m ready. I’m pursuing one possibility at the moment for a fight in Eastern Ghouta (in Syria) but that may be a few months away. I’m ready to rumble now. You just need a good cause and some cash to make it happen. Contact me.

The other key event that I’ve been involved in lately is the tour of Rev. Dr. Stephen Sizer around Australia. Stephen, like me, is an Anglican Priest. Also like me, he has a passion for building bridges between faith communities, and for seeing a just peace prevail in Israel/Palestine. Unlike me, he’s written several books on these subjects and has completed a doctoral thesis on the history of Christian Zionism!

I first met Stephen in Iran in 2014, and we’ve been talking about having him come to Australia ever since. This year it finally happened, and it was worth the wait. The only downside was that we only covered the east coast of Australia (Sydney, Brisbane and Melbourne) though he had invitations to both Adelaide and Perth.

If you missed hearing Stephen while he was in Oz, all is not lost. There’s plenty of video evidence of his visit:

Stephen’s main focus was the way certain elements in the church have contributed to the oppression of the Palestinian people through the propagation of Christian Zionism. If you don’t know anything about Christian Zionism, the above links are a good starting point. If you’re all too familiar with this aberration on the Gospel as it’s taken over your town, you might consider inviting Stephen to come and pay you a visit. You’ll find him through his web pages – www.stephensizer.com and www.peacemakers.ngo.

It’s always a challenge, coming up with a new sermon for Easter Sunday. Along with Christmas, it’s a day where you don’t have a lot of choice about the Bible readings or the theme. This Easter I really struggled to come up with a fresh angle on the text. I had plenty of thoughts about our community though and what we were going through, so I just started writing about us. Strangely, the message of Easter hope just seemed to rise right out of my reflections on the community!

This is a dangerous way to write a sermon, and I don’t recommend it to budding preachers. Even so, I had more than one person say to me afterwards that it’s the best sermon they’ve ever heard me give! That’s why I thought I’d share it today. 

“But Jesus often withdrew to lonely places and prayed.” (Luke 5:16)

Having been racing around for the last month, I’m heading into the wilderness for a few days. I’d like you to join me.

Dates: April 20th to 22nd
Aim: To find a lonely space where we can pray and reflect
Location: Binacrombi bush retreat (where mobile phones do not work)

You are probably familiar with my ‘Warrior Weekends’ programme, where we head out to Binacrombi for a weekend of intense physical training. My idea this time is to attempt something altogether different – a weekend of prayer and fasting.

My proposal is that we follow the Benedictine pattern of meeting five times for prayer on the Saturday – at 6 am, 9 am, noon, 3 pm and 6 pm. Further, I suggest we keep eating to a minimum until after our final prayer session of the day, after which we have a huge BBQ feast.

If that sounds too intense, be assured that you don’t have to fast, and you don’t have to pray either. You can spend the weekend swimming in the billabong, walking and looking at the stars if you prefer. I’d still like to have you with me.

The cost for the weekend is $200 for the rich, $100 for the poor and free for the destitute, and you decide which category you fall into. Let me know if you’re interested.

And before I let you go, let me make my plea for help. I really do need a few more Fighting Fathers to help me share the load. If I could pay for a strong team of assistants, I would. At the moment that’s not an option, so I’m accepting all volunteers and those who need minimal remuneration.

At the moment, I’m in particular need of a webmaster – someone who can help me oversee my websites and keep them running smoothly. Coding ability in HTML and PHP would be a big advantage but is not essential.

If I find the right person, they can help me restart the member site at www.fighting-fathers.com and this in turn could generate some income that could then help renumerate the webmaster. Even so, you have to be willing to start out working for peanuts. If that sounds attractive, contact me. If that’s not you, say a prayer for me.

Till next we meet, I remain …

your brother in the Good Fight,