I love these words from the Apostle Paul – “from now on we regard no one from a human point of view” – and yet it’s not entirely obvious at first what he means. Is Paul saying that we judge no one by their bank balance? Does he mean that we don’t pay any attention to a person’s worldly reputation or fame? Does he mean both of these things and more?

From my broader reading of Paul, my guess is that his focus was, as usual, on tribalism – on the way we divide ourselves into groups according to our race, class, religion and gender. After meeting Jesus, it become the burden of Paul’s life to convince his fellow Jews that God loved non-Jews just as much as he loved them.

That all sounds lovely and idealistic, of course, but it’s worth remembering that Paul lived at a time when he and his fellow Jews were enduring a foreign occupation of their land, and the Roman occupation was brutal. Any number of Paul’s listeners would have had friends or family who had been imprisoned or killed by the Romans (as Jesus had been, and as Paul himself soon would be)! It would have been hard to overlook the distinction between Jew and Roman, between US and THEM.

Paul’s starting point in adjusting his perception was always to begin with Jesus. If, instead of seeing people in terms of their categories (male/female, black/white, Jew/Roman, etc.), we look first at Jesus, and see everybody else through our common connection with Him, everything starts to look rather different. Indeed, the various ways we categorise each other, which had looked so significant, now start to look insignificant as we experience a oneness with these people through Jesus!

We said goodbye to our much-loved friend, Walter, this week. I had been busy planning his funeral until I was forwarded an email, written by him only a few weeks ago, saying that he wanted no funeral and no memorial service. I can only think that he did this because he knew he couldn’t afford to pay for the service and he didn’t want me to pay for it.

We held a luncheon instead. It was great! I had never physically met most of the fifteen people who gathered today for lunch, and yet we were ‘one in Walter’ (so to speak). Our common connection to our belated friend created a bond between us that gave us some wonderful space for tears and for sharing.

This, I believe, is how Saint Paul saw Christian community working. Our common connection to Christ generates familiarity and trust, and helps us move beyond alienation and fear. “So if anyone is in Christ, there is a new creation: everything old has passed away; see, everything has become new!” (2 Corinthians 5:17)

We live in a broken and divided world. Not only are the old tribal divisions as strong as ever, but we are discovering new ways of categorising and separating people, such as dividing them into the vaccinated and the unvaccinated! Today, more than ever, we need to rediscover our sense of inter-connectedness. In Saint Paul’s words, we need Christ to reconcile us to God and to one another.

I thought that love would last forever. I was wrong.

Of course, I knew that my dear friend, Walter, would not live forever. Even so, I truly didn’t expect him to shuffle off quite this early. Others saw it coming. I did not.

We held a wonderful luncheon in his honour, and various friends of Walter’s shared their reminiscences. I’ve included one such reminiscence below for those who knew Walter – a short eulogy from his good friend, David Baldwin.

With Walter gone, I’ve not only lost my best friend but also my book-keeper! Yes, even after Walter finished his work of keeping the books for the church, he continued to do so for me and for Binacrombi right up to the last few weeks.

In truth, my financial management skills are almost non-existent, so if anyone out there has book-keeping skills and would like to help, let me know. I am not expecting this as a freebie but intend to pay the appropriate rate (as I did with Walter). If you’re interested, hit me back by email or call me (0409-620-009).

I was back at Binacrombi last weekend which we celebrated with a dynamic Bush Bash on the Saturday night. God once again protected me from being beaten senseless by a group of large and enthusiastic Lebanese boxers – all of whom turned out to be a wonderful bunch of people. The video is below.

Our Sunday Eucharist was also a special time. David Baldwin was with me for that broadcast too, along with our great mate from the USA, Doug. We also began that session by sharing our grief over the loss of Walter. That video is below too.

This Sunday I hope to be joined by the dynamic duo of Joel Jammal and George Christensen – men who are both political activists and Biblical scholars. George is a member of parliament, of course, and Joel is a journalist who has been a key figure in Sydney’s freedom movement.

You can visit George’s Nation First website here to become better acquainted with him, and meet Joel through YouTube or Facebook. They are also both very active on Telegram (George here and Joel here).

Join us on Sunday at around 11.45 am if you’re interested to hear the lads chat about what they’re up to. We begin our formal liturgy at noon via:

All support is appreciated

If you’re able to financially support me via Patreon, it is deeply appreciated:

In closing, let me encourage you once again to take some time this week to make a contribution to our new member site at www.fightingfathers.com. Please add your articles and videos. If you have trouble accessing the site, let me know.

Please continue to pray for strength and for healing for dear Joy. 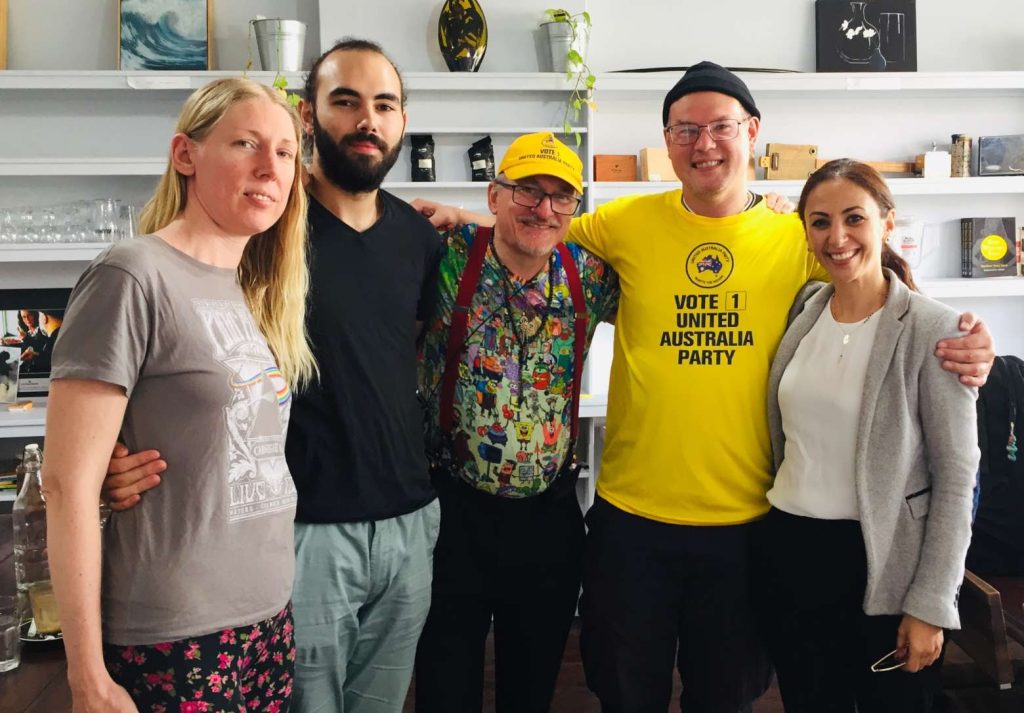