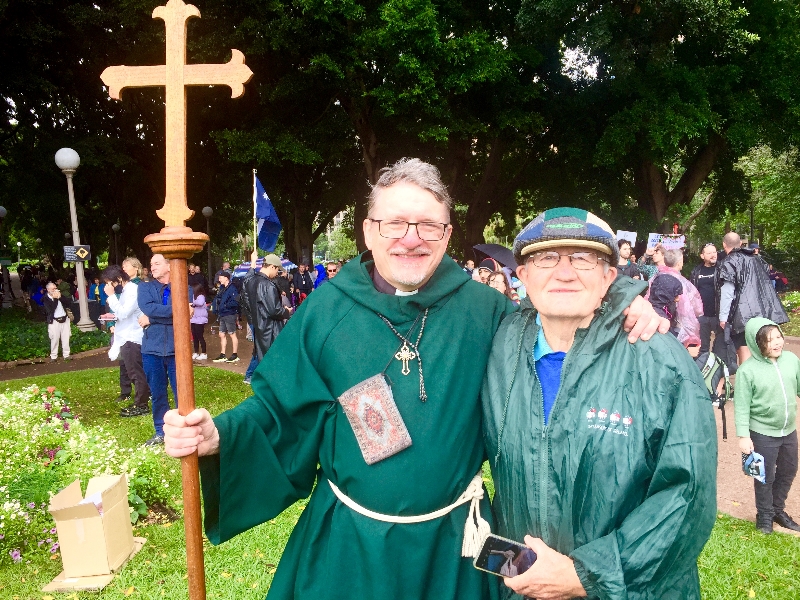 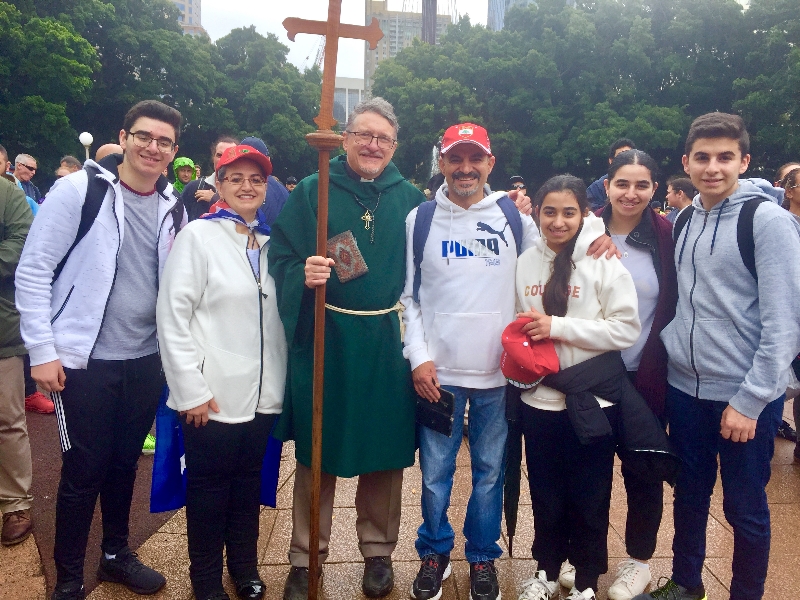 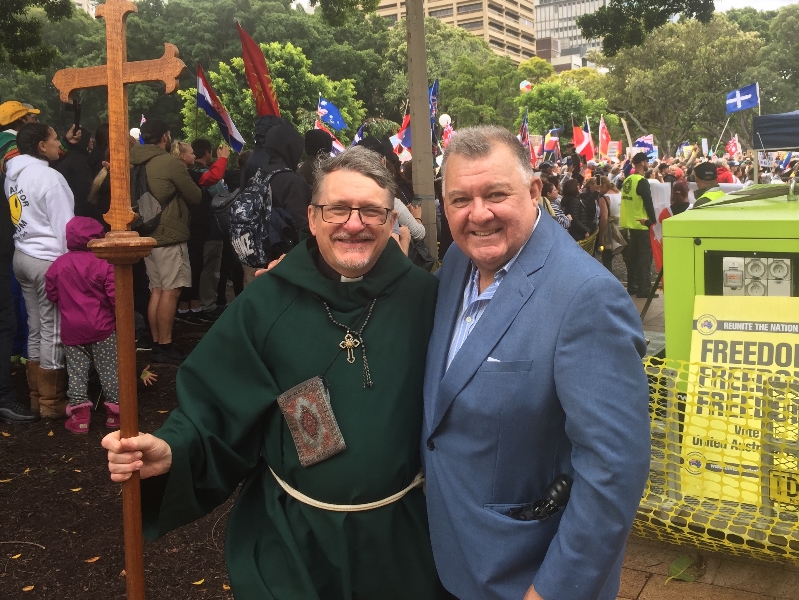 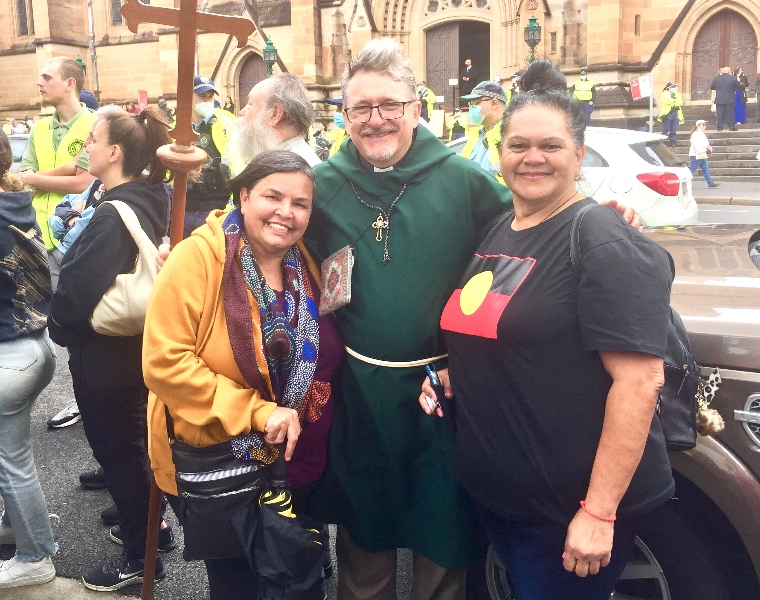 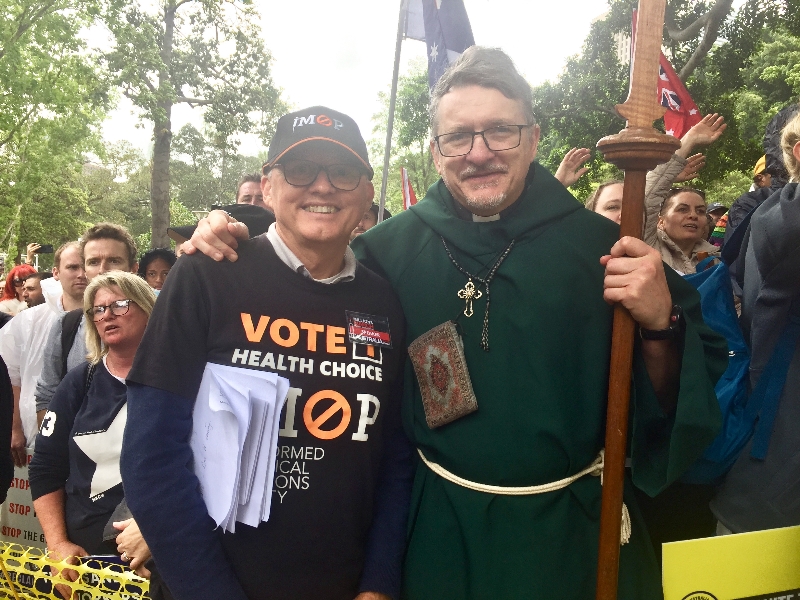 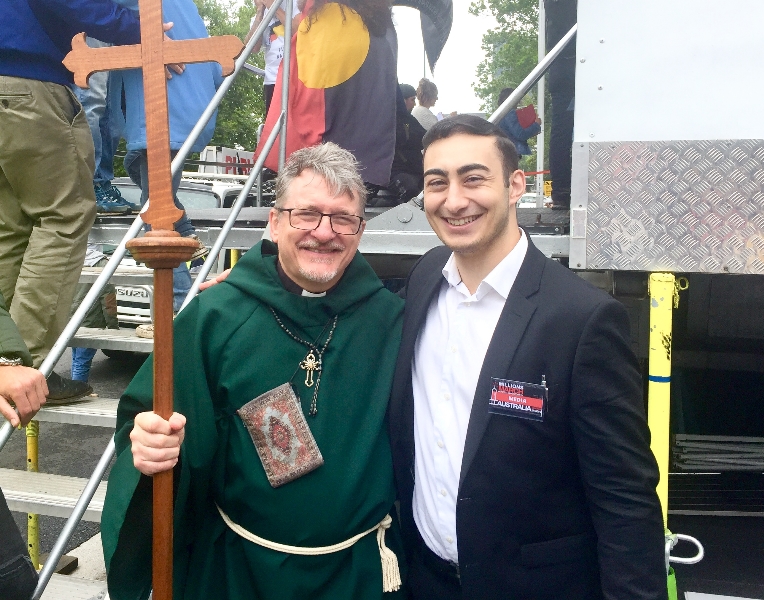 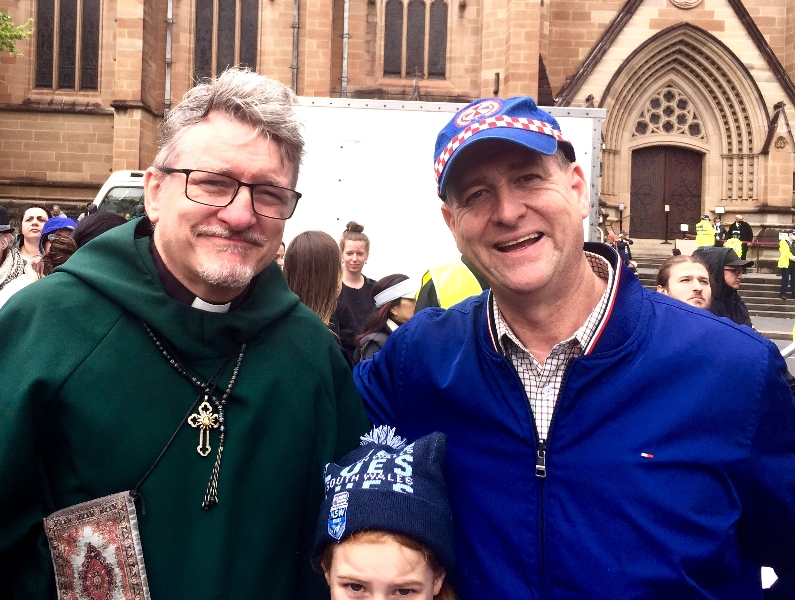 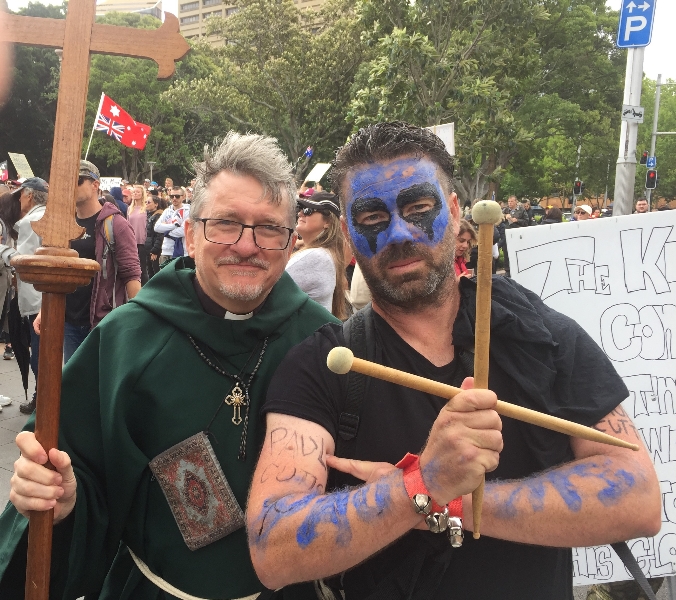 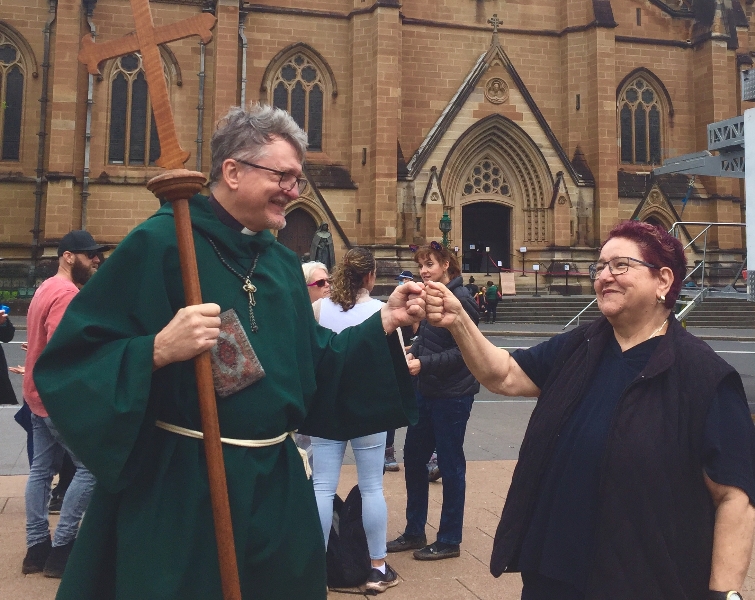 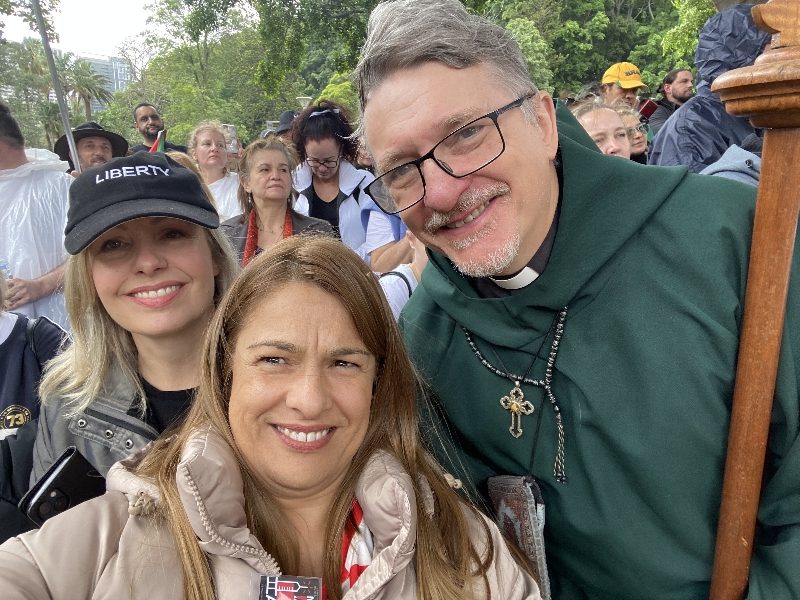 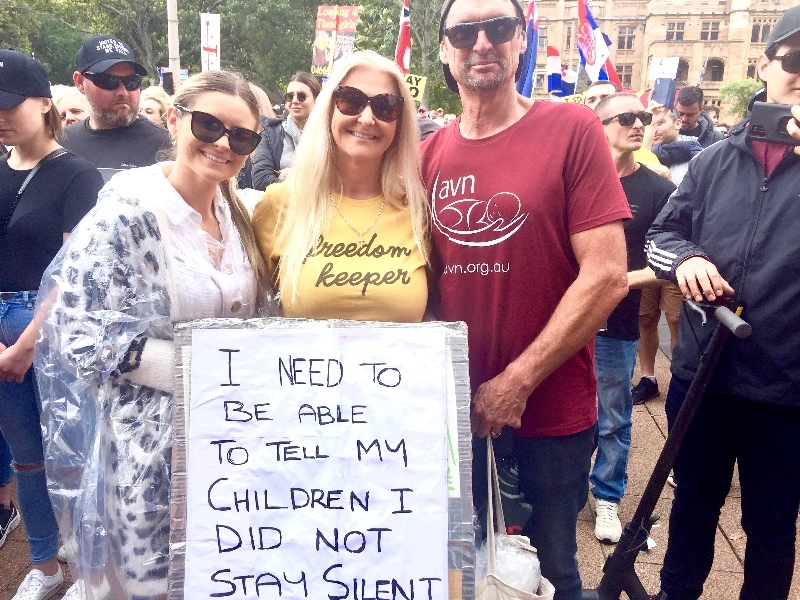 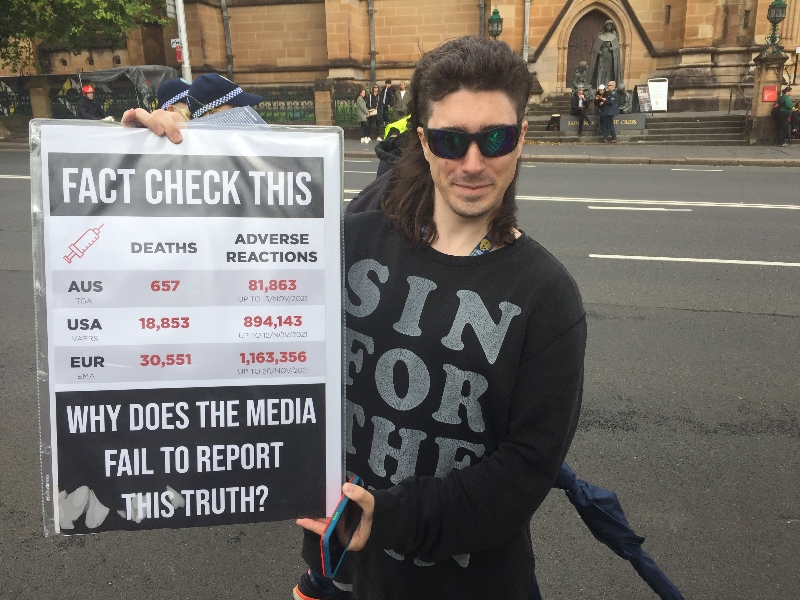 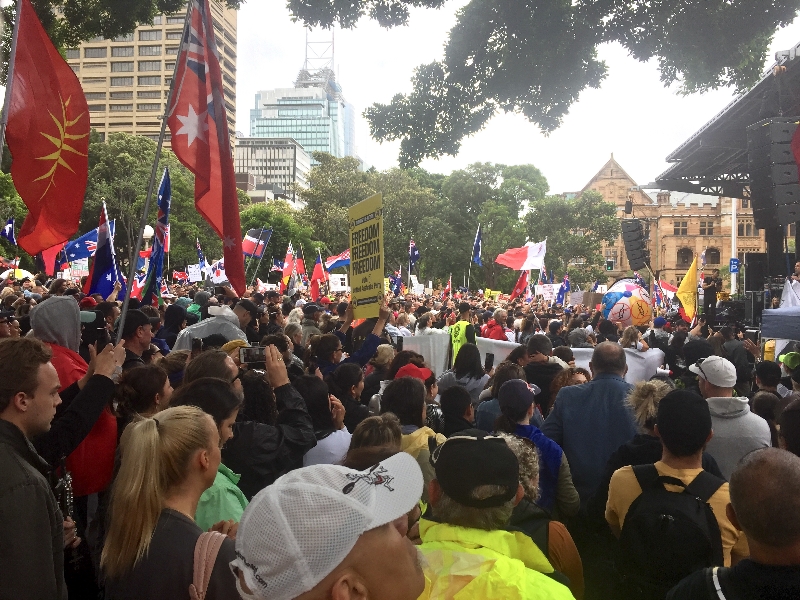 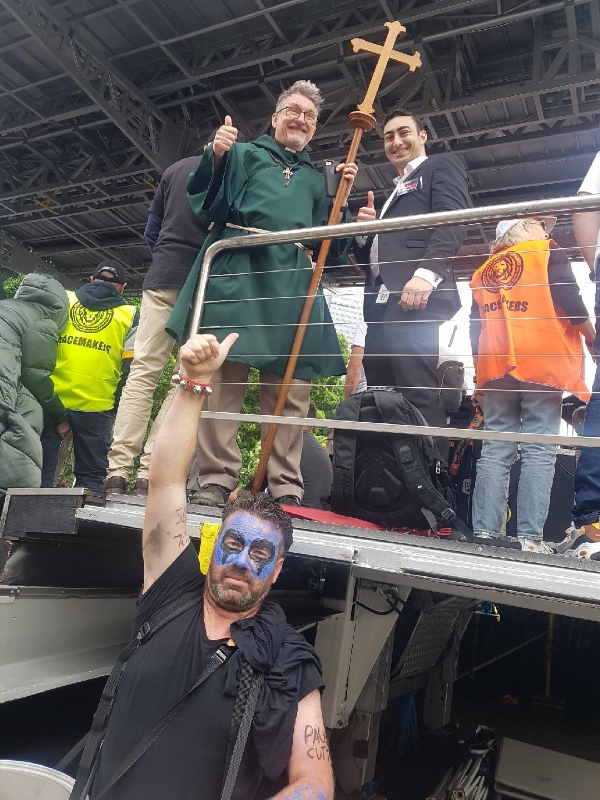 .
“There will be signs in the sun, the moon, and the stars, and on the earth distress among nations confused by the roaring of the sea and the waves. (Luke 21:25)

And welcome to the first week of the Ecclesiastical New Year.

That might not mean a lot to most people but last Sunday was the first Sunday in Advent, where churches around the world change their décor, put on purple, and start a whole new series of weekly Bible readings.

The word ‘Advent’ comes from the Latin verb, ‘advenio’, which means ‘to come towards’. Yes, we are coming towards Christmas, but from a faith perspective Christ is also coming towards us! Hence, Advent always begins with an apocalyptic reading that anticipates the Second Coming of Christ and the end of the world as we know it.

Such language often seems out of place in today’s world but … not at the moment! Indeed, at the rally I attended last Saturday in Sydney’s Hyde Park, apocalyptic language was the discourse of choice!

If you missed the rally, the mainline media reported that ‘hundreds’ of people were at the Sydney rally. I didn’t do a count, but there were at least ten thousand, and my friends said 50,000. The rally in Melbourne was apparently much bigger! These rallies have been specifically opposing mandatory vaccination, but for most of us the vaccination issue is only one component in a greater pushback against government over-reach and the restriction of individual human freedoms.

Our times are indeed unprecedented, and it is not surprising that people look at the chaos worldwide and see signs of the coming of the end. Even so, what has both shocked and inspired me is the number of people who seem to be interpreting this within a faith framework that leads them, not to despair, but to push back in hope.

I was chatting with one of the organisers of the rally who was saying that he believed Australia had been specifically targeted for these new restrictions and vaccine mandates because we are a people who have lost our spiritual roots. As I said to him, whether or not that is true, what I’m seeing emerge from this crisis is a broad renewal of spiritual energy, much of which is specifically Christian!

I closed last Saturday’s rally in prayer! I couched my prayer in a broader rallying-cry, but it was a closing prayer that the organisers had requested of me. Moreover, that wasn’t the only prayer said at that rally. One speaker led us all in the Lord’s Prayer, and beyond the spoken word there were signs and icons everywhere – crosses and other symbols of faith.

One protestor stopped me and said, “Father, do you think these things we see around us are what Jesus w 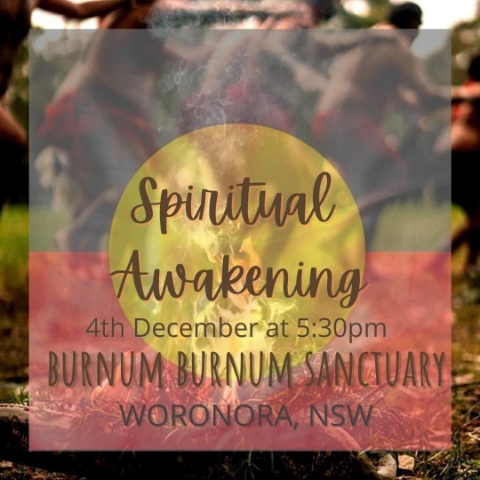 as talking about as signs of the end times?” I shared with him what my Father had said to me on this subject many years ago – that perhaps these signs are like waves on a beach.  Each wave hits us hard, and each can seem like a tsunami. One day the final wave will come and submerge us all, but it’s very difficult to be sure which wave we are dealing with.

I found last Saturday’s rally deeply encouraging, and the momentum is only building. There are rallies being held every week until Christmas, and this coming Saturday’s gathering is organised by members of our Indigenous community. The title of the rally speaks for itself – “Spiritual Awakening”.

“Be alert at all times, praying that you may have the strength to escape all these things that will take place, and to stand before the Son of Man.” (Luke 21:36)

It’ was great to celebrate last Sunday’s Eucharist with two good friends sharing the online space with me. David Baldwin is an old friend and has been a regular contributor to our online worship time. It was the first appearance though of Doug Pyeatt, who is a Special Agent with the US Government, which means that he and James Bond are on a first name (or number) basis.

Doug brought us the first reading – Jeremiah 33:14-16 – where the prophet looks forward to a day when a new leader will emerge to lead God’s people to better times. As we’re in the first Sunday in Advent, no doubt we’ve been given this reading because it’s a hope for leadership that we, the church, see fulfilled in the coming of Jesus. Even so, the prophet wasn’t thinking about something that would happen five hundred years later. He was looking for God to solve the problem they were experiencing in the 6th century B.C.

God’s promise to Jeremiah is that they will be provided with good leadership – something that was poorly lacking in their own day. History teaches us that in desperate times people look for saviour figures and often make terrible choices (Hitler and Mussolini being two obvious examples among many). God’s promise is for a leader who will be both powerful and just.

David Baldwin brought us the second reading from 1 Thessalonians 3:9-13. Dave pointed out that this was also a forward-looking passage. The Apostle Paul seems to expect Jesus to return quite soon, and this expectation should give us hope and help us focus our lives on things that are worthwhile.

Our Gospel reading from Luke 21 was, as mentioned, full of imagery of wars and calamity and the world shaking, accompanied by exhortations to stay sober and focused. As I say, it all seems very contemporary, but whether or not the calamities we are experiencing now indicate the final apocalypse or just another wave on the beach, they function to help us focus on our priorities and get our lives in order.

Jesus warns us not to be ‘”weighed down with carousing and drunkenness” (vs.34) since checking out is a natural way to respond to overwhelming stress. The challenge is to face things head-on, recognising that these are signs, not of our coming annihilation, but of imminent victory!

We’ll be broadcasting live again this Sunday from Binacrombi. Tune in to join us at midday via either:

If you are joining us through the Father Dave Facebook Page, please make sure that you subscribe to my videos and don’t simply followed the page. In order to subscribe (and receive notifications) you need to click the bell icon during the live stream.

As mentioned above, the “Millions March against Mandatory Vaccination” protests will continue to take place each week, in one form or another, between now and the end of the year. If you’re still thinking this issue through, one resource I would sincerely recommend is an hour-long documentary, entitled, “Follow the Science”, featuring various medical experts who don’t support the dominant narrative.

And thank you to all who responded with both affirmation and concern to the news I shared last week about the sudden and unexpected demise of Father Dave’s Fight Club. I am still having trouble accepting that our thirty-one years sweat and blood are going to come to an ignominious end this month.

This week we tried or organise a mediation meeting with the church through the Small Business Commissioner but the church refused to meet, saying that an agreement has already been signed off on with another party who want 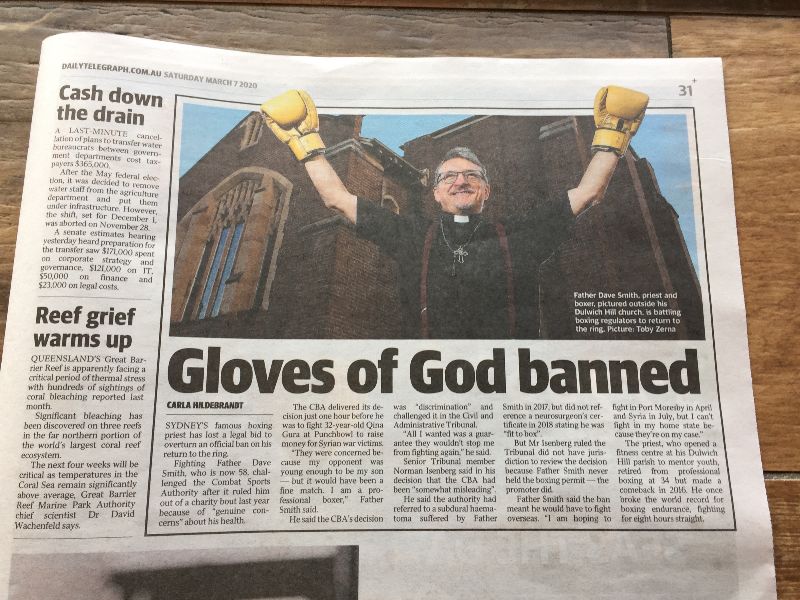 The party being referred to is a local disability service, staffed by a wonderful group of people who I know well. Indeed, another representative of their group contacted me today, asking me not to hold them responsible for our eviction. They do not want us to go and say that our space is not suitable for them anyway.

Some of the members of our club, along with some of the parents, are finding the church’s attitude hard to comprehend and are wanting answers. I’ve encouraged them to approach the church themselves as I don’t have any. Perhaps we’ll end up with more public protests outside the church building during the Sunday services. Perhaps not. If anything develops, I’ll let you know.

Finally, if you’re not a financial supporter yet and you can afford to be, you’ll find the usual three options on my Patreon page:

If you’re in one of these heavier divisions, joining me at Binacrombi over the coming weekends won’t cost you anything. If you’re not, we’ll accept a donation anyway.

I’ll hope to see you on Sunday at midday for our weekly Eucharist where we’ll hopefully be joined by more wonderful Bible readers and commentators. Until then, may God bless you and strengthen you for the work to which you have been called.

P.S. I’ve also added below the latest Binacrombi Bush Bash video below. I’ve given up combining it with the Sunday Eucharist and am doing them separately. It seems that those who appreciate both preaching and punching are only a small minority. 🙁