I got caught in a domestic violence situation tonight.

I think I handled it just right. It’s so hard to get these things right.

I was putting the garbage out and heard what I thought at first was kids shouting at each other. Then I saw a woman on the ground and a man standing over her and … I realized happily that I had my clergy shirt on. I adjusted my collar appropriately as I rushed to the scene.

The clergy collar has always proven to be more powerful to me than a superman outfit in situations like this. Nobody wants to punch the priest, and nobody wants a priest watching them while they beat their woman.

There was lots of shouting going on and the woman was screaming obscenities but it didn’t seem as if any punches had been thrown so I stopped about three meters short of the two and stood at right-angles to them without saying anything. From the nature of the shouting and accusations it was clear that they were partners (of sorts).

There was another woman involved (a friend of the first woman) who was also screaming at the man and probably wasn’t helping. The man had no shirt on but didn’t seem to be drunk. The woman would scream “give me my phone back. Give me my smokes”, etc. He would then throw the smokes/phone at her and then lean over and grab them back from where she’d dropped them.

None of this was done in an overly violent way though I was aware that things could degenerate into open brutality at any moment and I was only a millisecond’s distance from the man’s right hand if it came to that. Even so, I think that by standing where I was, saying nothing and so not confronting the man directly but evidently monitoring the situation very carefully in my clergy collar, I helped keep a lid on the problem.

The man eventually complied with the woman’s repeated requests, such as “f**k the hell off” and “get the f**k out of my life” (or at least with the first request anyway). He disappeared and she then walked around the corner. I took the opportunity to call 000 and the police said they were on their way.

The woman had sat herself down in a heap alongside our local Salvation Army store. I spoke to the friend who was all very grateful to me, recognised me as the boxing priest, and told me all about how God had spoken to her while she was in a coma. Our happy conversation though suddenly ended when she screamed “Oh my God, he’s coming back“, and sure enough he was coming back, and I turned to take my stand this time between the man and his target.

I figured this time that things were highly likely to get bloody but before the man reached us a paddy-wagon screeched to a halt alongside me and four policemen had the man on the ground and hand-cuffed within about 0.5 seconds! The man didn’t resist at all. Two of the police stayed with the man, one talked to the woman and the other came over to me “Hey Father Dave, how’s it going?”

This young Constable took down all the relevant details but he was frankly more interested in hearing how his mates were doing at boxing training (as I’m currently training three officers from the Marrickville Local Area Command).

It was a horrible way to end what was otherwise a quite night of domestic tranquility. I stepped out into a war-zone. Then I stepped back inside again. I’m not used to that now like I used to be. I think that’s how I learnt to compartmentalize in the early days here. 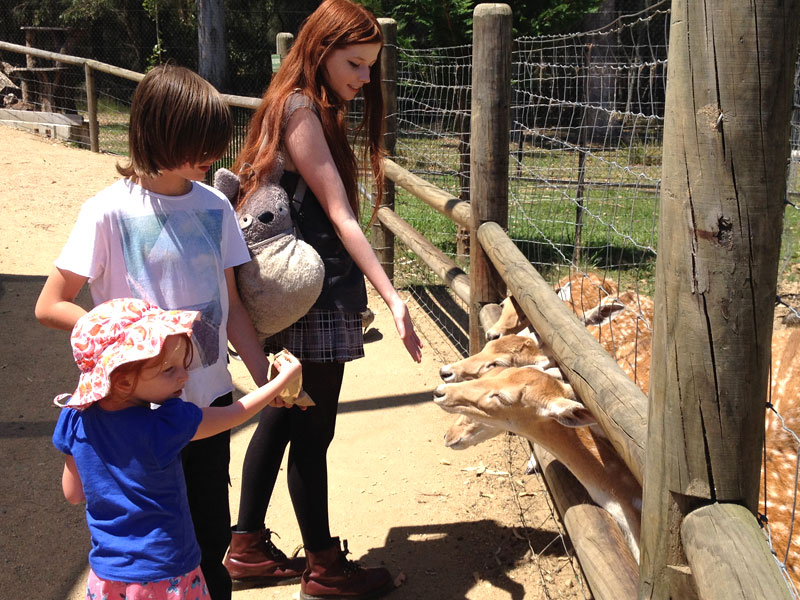 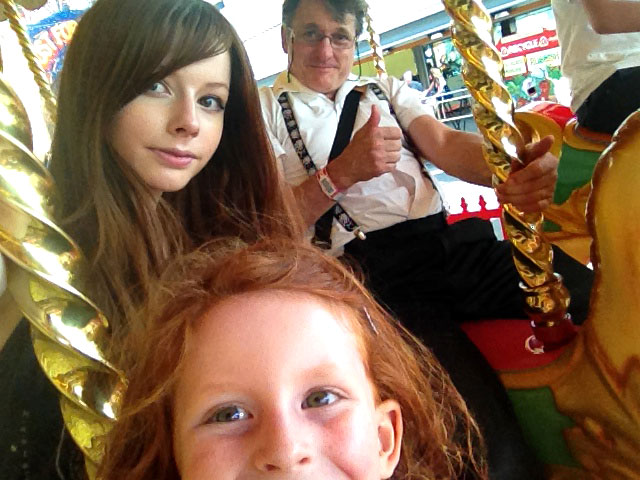 We still enjoy the merry-go-round at Luna Park 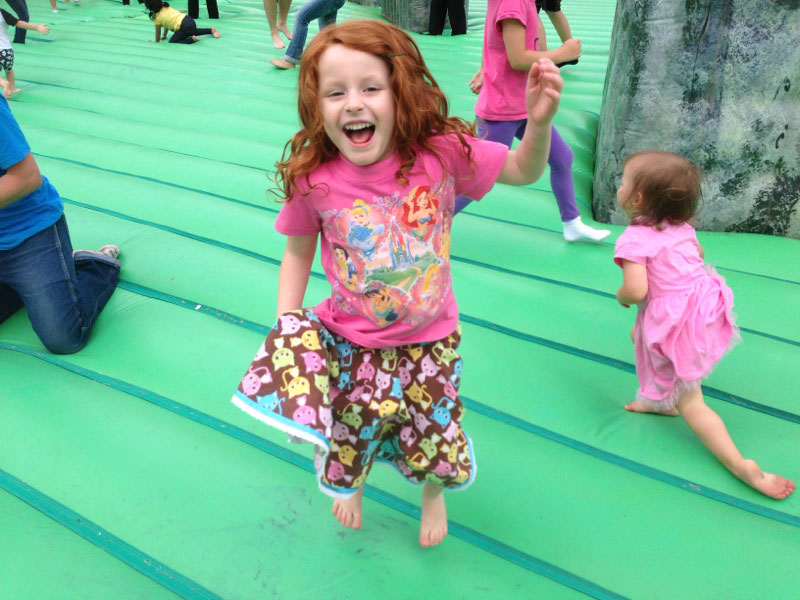 Festival of Sydney jumping castle at the Opera House 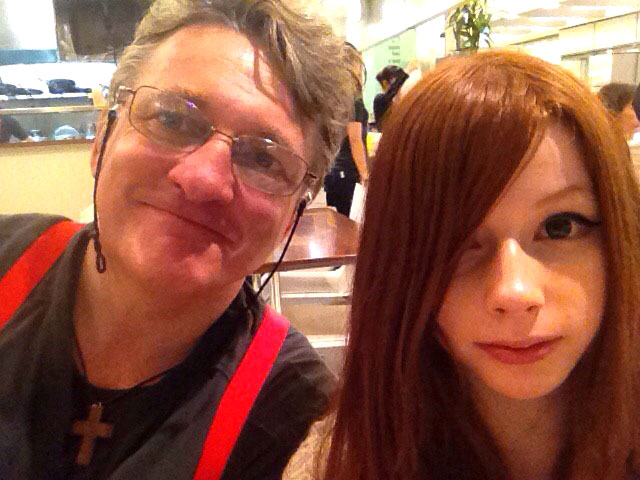 Imogen and I do dinner and a movie! 🙂 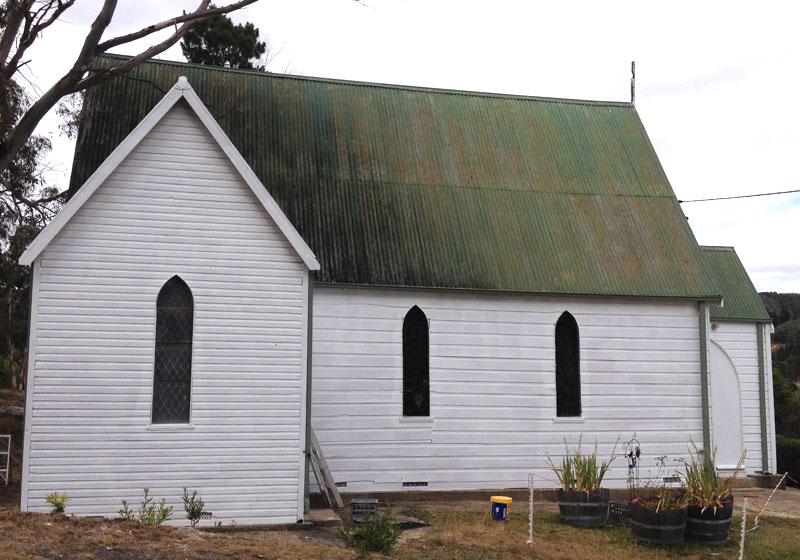 Looking for a chapel for Binacrombi

And so the school holidays are well and truly over and it’s back to business for all of us.

I didn’t really get a proper holiday myself this January but I did spend some lovely time with the kids as you can see from the above.  I also made some significant steps forward in terms of my New Year’s resolutions!

In case you’ve forgotten, I set five goals for this year:

At the moment I seem to be moving forward in leaps and bounds on all fronts!

In terms of Binacrombi, I believe I have found my first Abbott – a true man of prayer and a legendary sportsman who can help develop the monastic side of our retreat without compromising our commitment to extreme sports (trail bike riding, boxing, etc.)!

We’ve also been offered a chapel that we may be able to simply pick up and relocate to our site. Of course these things are never simple but I’ve already been looking over things with a builder-mate and we’ll know soon enough what is possible.

I can’t give the names and details on any of the above until things are more settled but it seems clear that the Lord wants us to proceed with this vision.

As far as Syria goes, plans are coming together very quickly for another mission that will probably happen this side of Easter!

Again, I can’t give you details at this stage but I can give a broad outline of what we hope to achieve:

No prizes for guessing who came up with this last idea. The exciting thing for me is that my colleagues around the world are as excited about the prospects of setting up boxing programmes in refugee camps as I am!

And so far as my hopes for a world title go, it seems that I may have two fights on the horizon – one in Dublin and another in Syria itself!

Frankly, it doesn’t really matter whether there is any title attached to either of them. I have a feeling we’ll be able to accomplish something significant with those bouts if we can make them happen!

As to my fifth goal – helping my kids through school – we’re off to a good start! Two out of three are back to their studies and I took Francesca for her evaluation session for Kindergarten today. She will start regular classes on Monday!

Enough prattling from me for now about goals and achievements, but I think the above proves the point I made in my last missive – that if you tell people what your goals you are far more likely to move on them!

I’m still hoping that you might share some of your hopes and dreams for the year in the comment-box below. Go on! Be daring! Dream big!

I’ve been preaching rather a lot lately so I’ve got plenty of sermons I could pass on to you today but I really want to share with you the one I did for the Feast of the Holy Family.

I’m conscious of the fact that ‘Christian values‘ and ‘family values‘ are often taken as being synonymous and that the Holy Family (Jesus, Mary and Joseph) are generally depicted as being the archetypal white, middle-class nuclear family unit.

A little investigation of the texts though suggests that Jesus’ human family was far from the ideal model that preachers of family values would like it to be. Indeed, I suspect that most family therapists would have found plenty of material to work on there!

I don’t know whether you’ll find this sermonic exploration into the family life of Jesus encouraging or unnerving. Either way, if the church is going to make pronouncements about what a Christian family is supposed to look like, this material needs to be taken into account!

OK Fighter, I’ll be in contact again as soon as I’ve got the details of the Syria mission all worked out. We’ll be doing some fundraising and simultaneously launching Fighting Father Denning’s documentary movie of our last Syria trip.