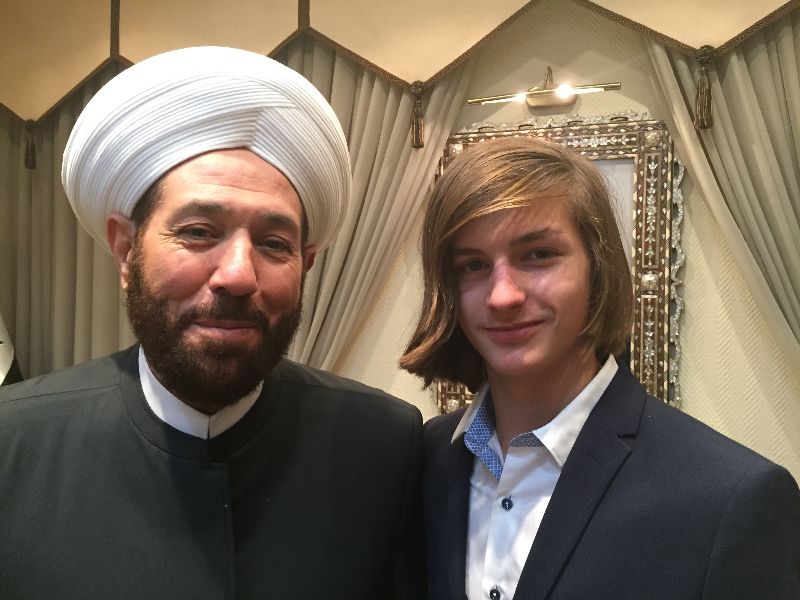 Soren and the Mufti 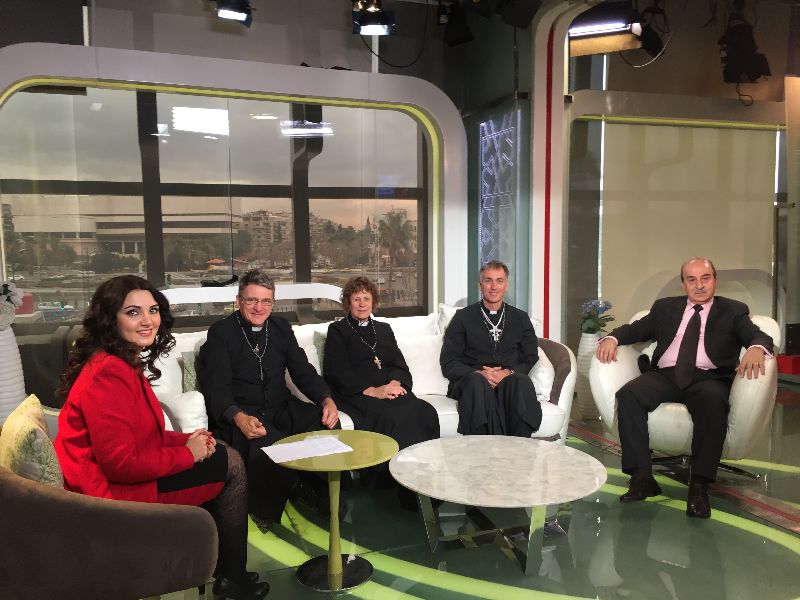 on the set of Syrian TV 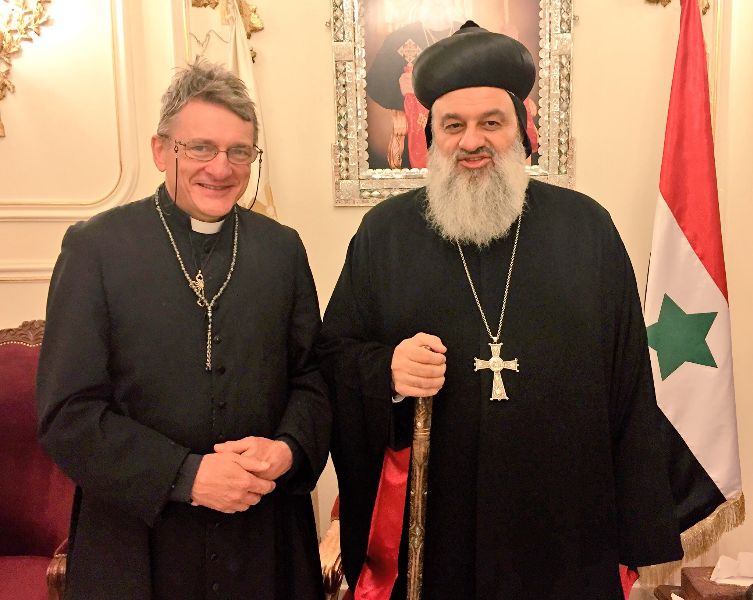 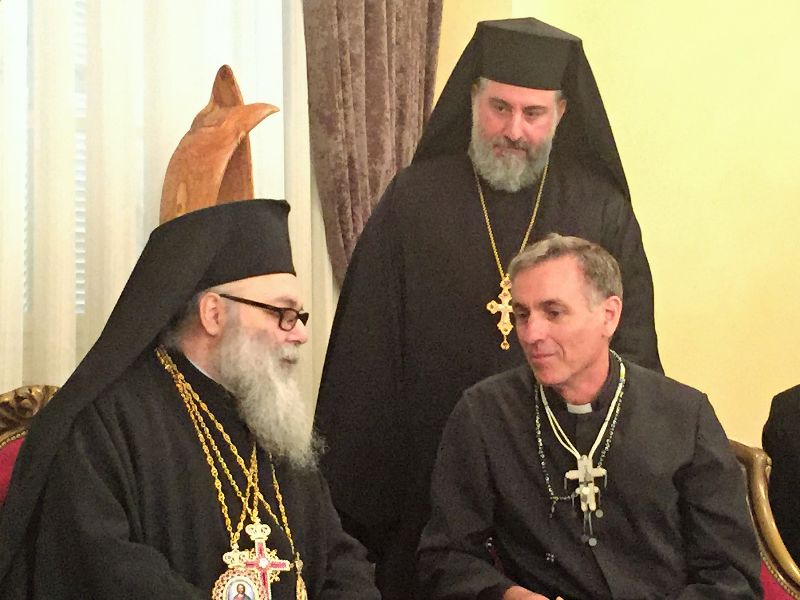 Father Michael with the Patriarch and Father Alexi 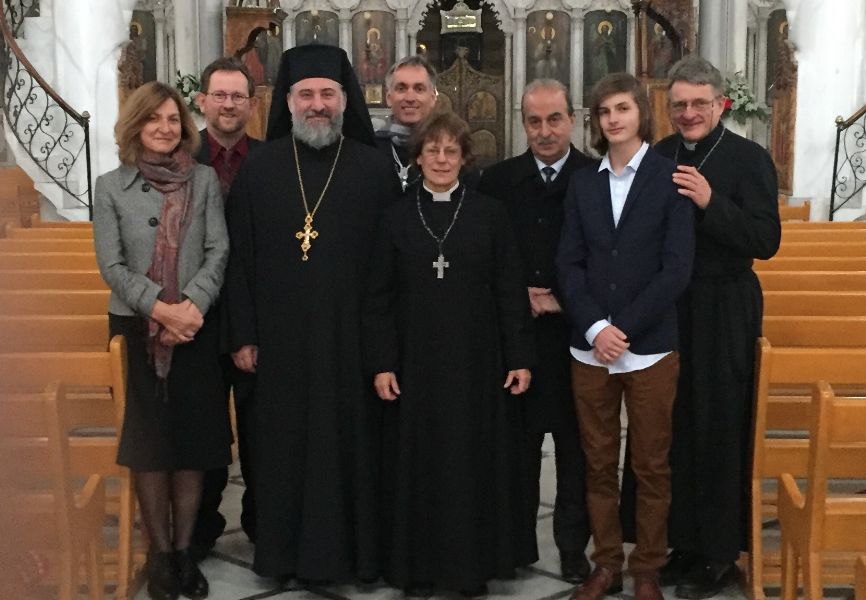 with the team at the Greek Orthodox Patriarchate 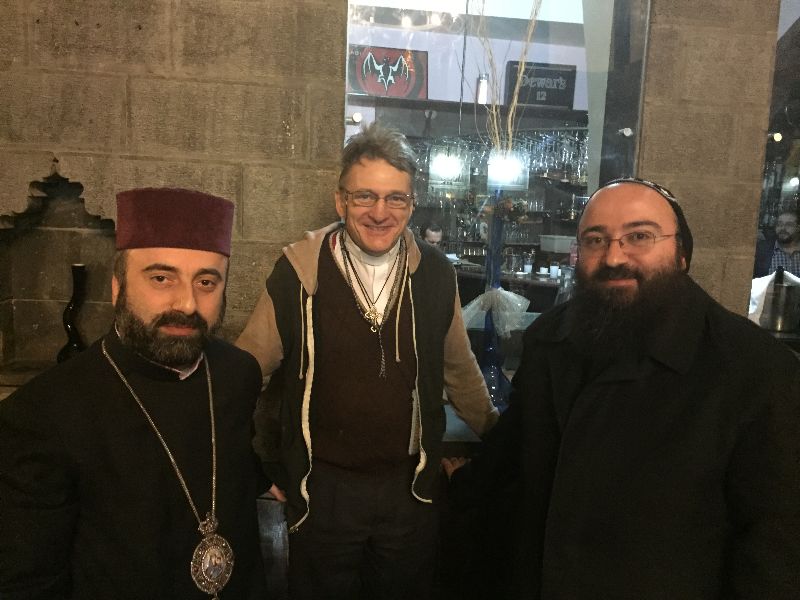 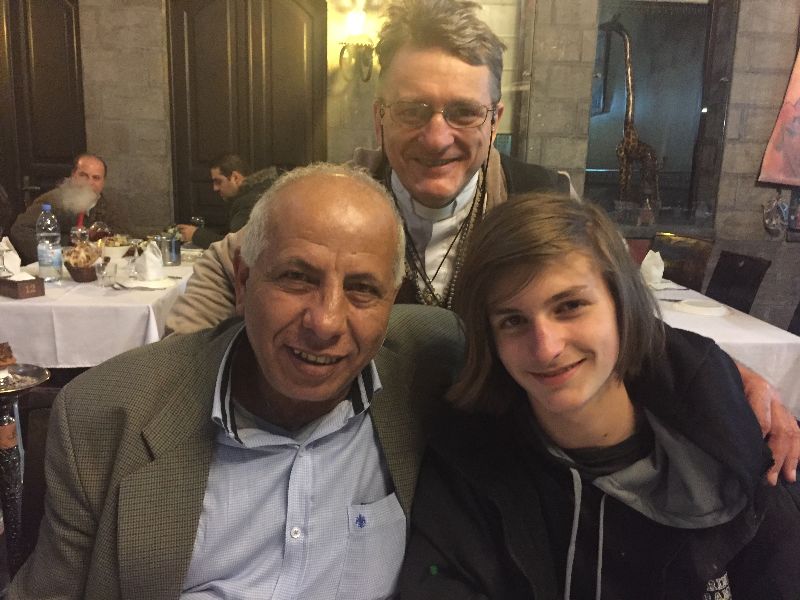 with Issa - boxing coach of the Syrian Olympic team 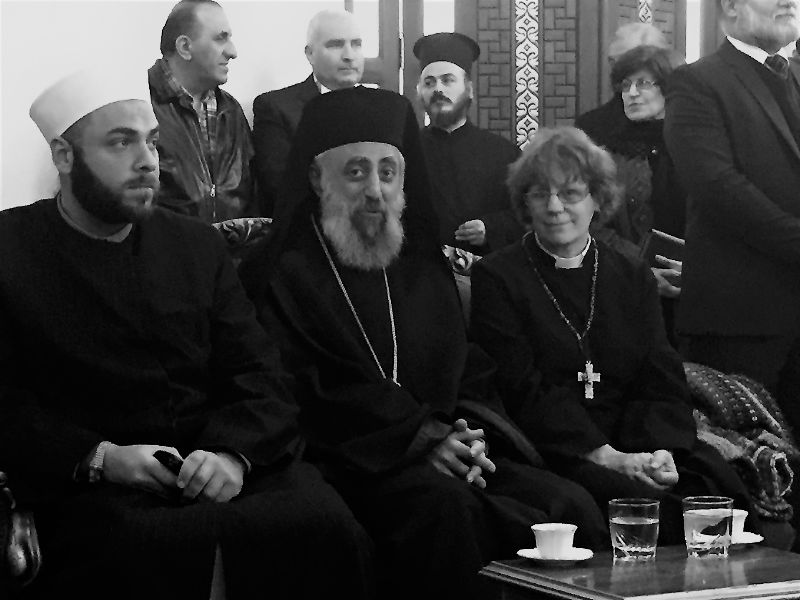 Christians and Muslims meet at the Orthodox Patriarchate 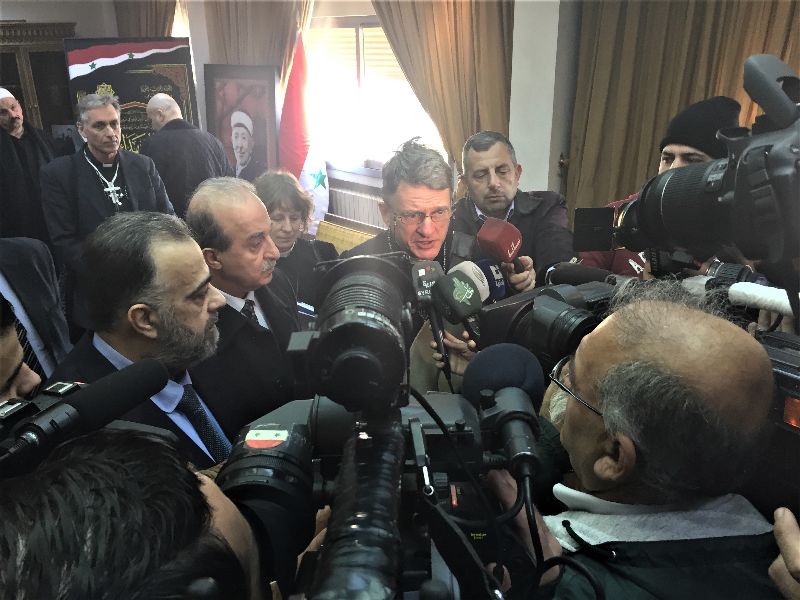 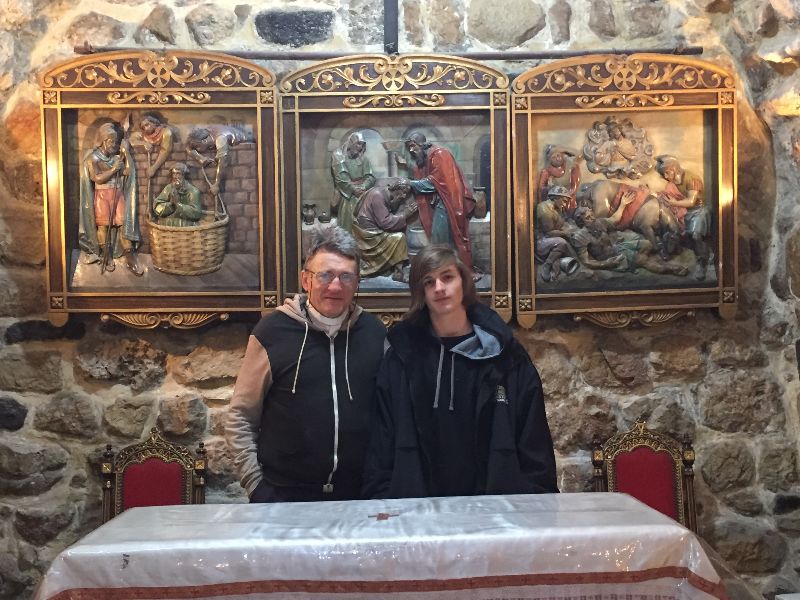 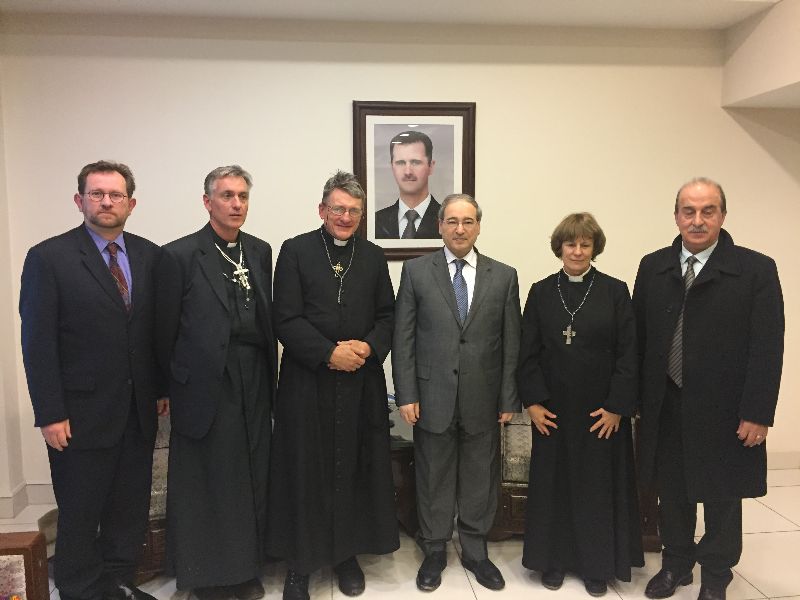 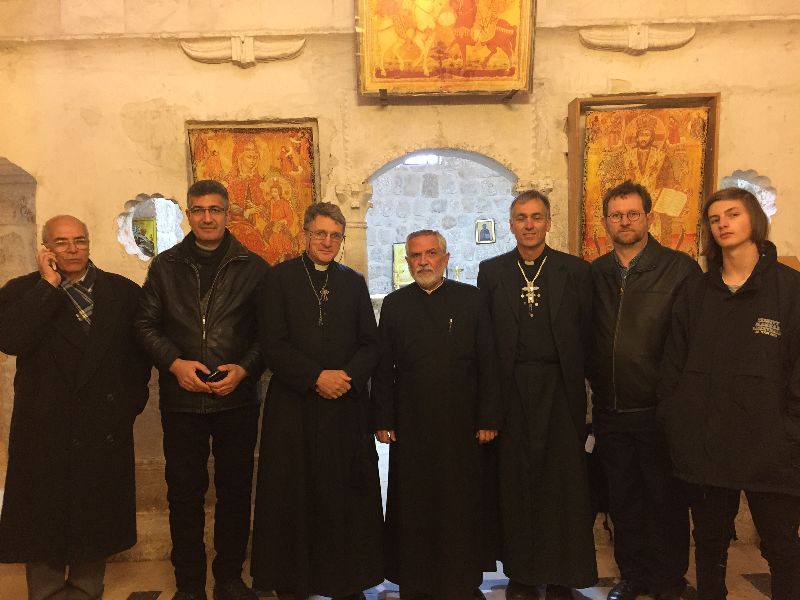 in St Thecla's church in Maaloula 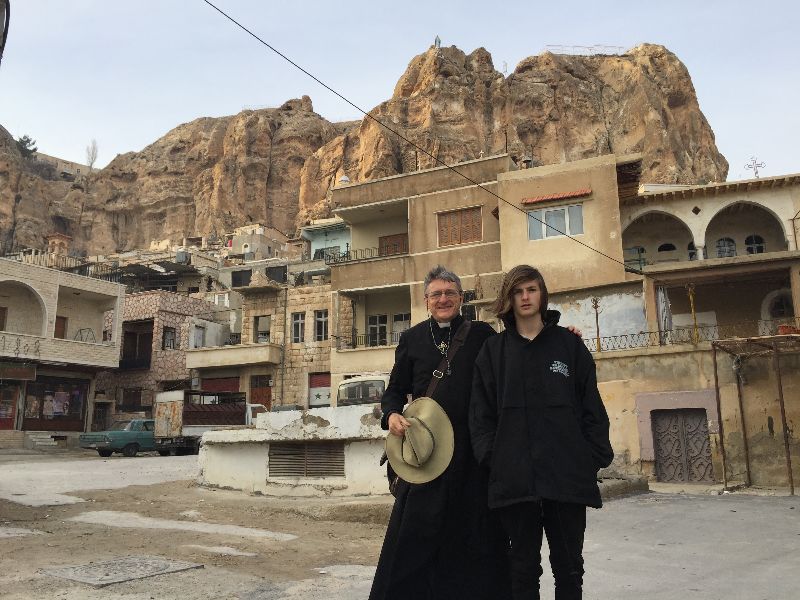 Maaloula - one of Syria's most ancient Christian villages 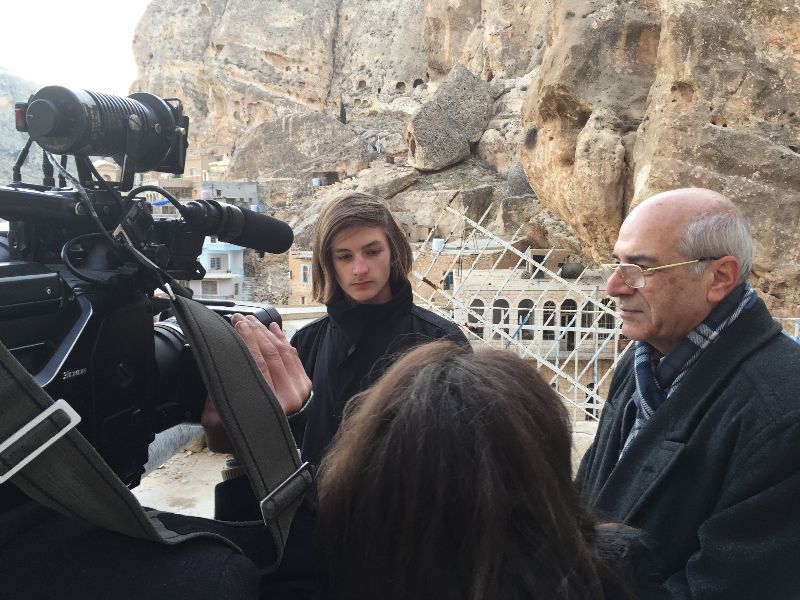 Soren does his first media interview 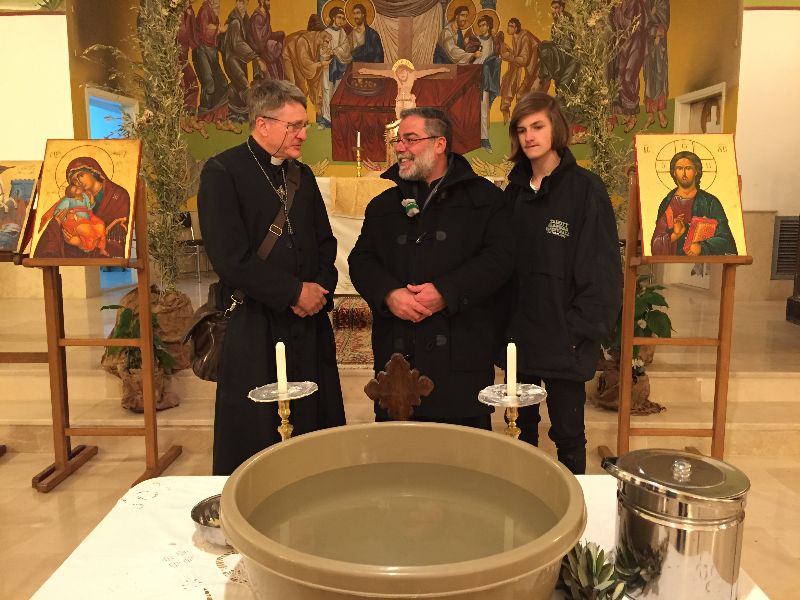 Firstly, let me thank all of you who made our New Year’s trip to Syria possible – supporting us financially and with prayer. Secondly, let me apolgise for the time it has taken to feed back to you about the trip.

I’ll address my time issues later in this missive, but let me say first that I think the trip was highly constructive and that we achieved most of our aims, if not all of them.

We didn’t get to Aleppo, and we didn’t get the media focus on the Syrian people that we had been looking for. Even so, we did deliver some tangible aid and, most importantly, we did work out a way of getting ongoing aid where it’s most needed.

This, in my opinion, is the biggest problem facing Syria at the moment. The victory on the battlefield is all but complete. Even so, life is not returning to normal. So many homes have been destroyed and so many people are in need, and the country is simply out of resources! The Syrian people need help in order to rebuild, yet instead of sending them aid, we impose sanctions, making it impossible for them to rebuild!

There is a demonic paradox at the heart of Western foreign policy towards Syria:

US Senator, Chris Murphy, summed up the situation rather succinctly in a Twitter Tweet recently: “We bomb your country, creating a humanitarian nightmare, then lock you inside. That’s a horror movie, not a foreign policy.”

We must urge our governments to show some humanity and drop  these vicious sanctions. Until this happens though, we must find ways around the sanctions to get resources where they are most needed. Is there a back-door into Syria for humanitarian aid and medicines? The answer is YES, and that back door is the church!

Our delegation was deeply impressed by the aid work being done by the church in Syria, and no work was more impressive than that of ‘Gopa Derd’ – the aid arm of the Greek Orthodox Patriarchate.

The Greek Orthodox Church is by far the largest Christian communion in Syria, and they have aid work going on across the country, including major food-distribution and education centres in Aleppo and other critical areas. Gopa Derd does not discriminate in terms of who benefits from their aid. No preference is given to Greek Orthodox Christians or other Christians over Muslims or anybody else. It is a truly Christ-like work!

Most importantly, Father Alexis Chehadeh, the head of Gopa Derd, has a German passport, allowing him to travel in and out of Syria with ease. This means that money can be sent to Alexis’ German account and he can physically carry that money back into Syria to channel it where it’s most needed. Thus we get around the sanctions!

If you’d like to know more about Gopa Derd, this 20-minute video is worth watching in its entirety. If you’d like to contribute to their work, contact me. I can give you the bank account details you need. Personally, I’m trying to coordinate a broad fundraising effort from churches in Sydney to support the work of Gopa Derd. At the same time, I (and my fellow delegates to Syria) are doing our best to lobby our government to end the inhumane sanctions.

Our interview on Syrian TV

In keeping with the Syria focus of this post, the video I’m featuring today is of the delightful Vanig Gonjian interviewing our delegation on Syrian TV. I note that neither my son, Soren, nor Troy Hester – both of whom were essential members of our team – were included in the interview. Even so, it was a great opportunity for Mother Carol, Father Michael, Maher and myself, to further extend the hand of friendship to Syria, not only on behalf of our greater team, but on behalf of all Australian people.


If you feel you’ve missed out on getting your sermon fix today, you can always get my latest sermon on www.fatherdave.net, or my entire sermon video-gallery here! You may also be interested in my Syria video-gallery, featuring our 20 most recent Syria clips.  You’ll find that here.

I need your help

In closing, let me apologise again for the time it’s taken to get this update to you. The truth is that I am not on top of things and that I frankly need more help if I’m going to keep all the balls in the air. I balance a variety of responsibilities:

I’m also trying to finish a book on “Christians and Muslims can be friends”. On top of that, there’s my commitment to Syria and all that is involved in that, as well as my other social justice and community commitments.

I sincerely believe in the work I’m doing but I need more help if I’m going to get on top of things. So far as I can see, I have three options:

My search for that big fight is no joke. I haven’t fought for more than a year now and have just had another fight cancelled on me (my 3rd cancellation in a row). I’m fit and ready to rumble if any of you can help me find an opponent.

While I wait for that, I’m open to all suggestions about broadening my support base. As things stand, about 20 of your guys subscribe to www.fighting-fathers.com for $10/month and one of you contributes $100/month. I am deeply grateful to you guys, and if it wasn’t for your support we would have crumbled long ago. Even so, I need a lot more active subscribers if Fighting Fathers Ministries is to move forward, and I’m not sure if that’s even plausible.

So … if you have any ideas, please share them with me. Alternatively, if you’re feeling called to be that overworked and underpaid apprentice, let me know. In truth, I’m wanting to hear from you. All my contact details (including my mobile number) are in the ‘contact’ section of www.fatherdave.org (non-mobile version). Call me, visit me or email me with your wisdom.